This week is dedicated to the late Alan Thicke (born March 1, 1947 in Kirkland Lake, Canada ,died December 13, 2016 at Providence Saint Joseph Medical Center , Burbank , CA ). The multi-talented actor, singer/songwriter and composer died a couple of weeks ago of heart failure. Thicke’s most famous role was as Jason Seaver in the successful TV sitcom Growing Pains that ran between 1985 and 1992.

Thicke starred in countless other TV shows and movies while managing to have a rewarding career in the music field. Thicke composed the themes of pivotal TV shows including The Facts Of Life, Wheel Of Fortune and Diff’rent Strokes while enlisting a young piano player named David Foster to tickle the ivories. The Hitman and Thicke, both Canadians, built a deep friendship that lasted for forty years. Thanks to his connection with Foster, Thicke also co-wrote songs like “Stop Me From Starting This Feeling” for Lou Rawls and “Sara” with Bill Champlin that was an entry on Billboard’s Hot 100 in 1981.

In the early eighties, Thicke hosted his own talk show in Canada aptly titled Thicke Of The Night. The rocking theme song of that show was co-written by Thicke with Foster and Jay Graydon. In 1984, Atlantic Records released “Thicke Of The Night” as a single. Please read about all the aforementioned songs in the archives.

The b-side of “Thicke Of The Night” was the evocative ballad “Grandma.” Again, it was a co-written piece by Thicke and Foster who also arranged and produced the track. This obscure composition carries all the winning elements of Foster’s adult contemporary greatness of the eighties. It has a dramatic, instrumental arrangement based on Foster’s piano and keyboards, powerful guitars played by Jay Graydon with an elegant solo plus smooth vocal harmonies sung by Champlin. Thicke did a respectable job with his lead vocal although he was not a Kenny Rogers or Kenny Loggins. The overall atmosphere of the piece was very close to the music that Foster created in that era for those music stars. Take a listen to appreciate the artistry of Alan Thicke and celebrate his long and successful career. 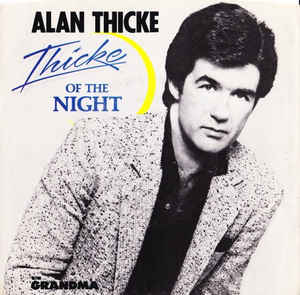 [Chorus]
Grandma, I had the best of your years
Grandma, I love you so
And Grandma, you had a shoulder for my tears
It didn’t always show
But I hope you’ll always know
You been all the world to me

[Verse]
Grandma, you surely earned your rest
You won your place among the stars
Grandma, I only knew you at your best
No one else on earth but me
Could ever hope to see
Just how beautiful you are

[Bridge]
It seems to me I should’ve told ya
Before we grow a moment older
Let me take the time tonight to say
Grandma, everything I’ll ever be
Was part of what you gave to me
And everyone you ever knew
Tells me how lucky I was
Having you