from BACK TO BROADWAY

“Some Enchanted Evening,” from the 1949 Rodgers & Hammerstein musical “South Pacific,” was a Broadway tune that became an evergreen thanks to dozens of interpretations by various recording stars. “Some Enchanted Evening” was considered one of the most successful tunes ever to come from a musical.

Barbra Streisand’s 36th studio album, Walls, saw the light of day in November 2018. It was another hit for the legendary songbird, peaking at #2 on Billboard’s Top 200 and #6 on the UK albums charts. Walls presented mostly original tunes co-written by killer tunesmiths like Carole Bayer Sager, John Shanks, Walter Afanasieff, Desmond Child and Steve Dorff. The production was mainly handled by Afanasieff with selected tracks crafted by Child, Shanks and David Foster, who came out of his hiatus to work on the new song “Better Angels.”

IF I DIDN’T LOVE YOU

from A LOVE LIKE OURS
Written by Bruce Roberts & Junior Miles 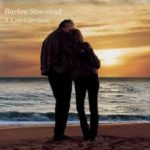 A Love Like Ours was Barbra Streisand’s 28th studio album. It saw the light of day on September 21st, 1999. The string of effective love ballads included on that project celebrated her recent marriage with veteran TV and movie actor James Brolin. A Love Like Ours was the classic triumph of traditional pop with a bulk of perfectly-dosed tender love songs that, from time to time, ventured into light jazz, Latin-tinged pop and radio-friendly, adult contemporary stuff. David Foster was one of several heavyweight music-makers on board and produced two tracks.

I KNOW HIM SO WELL

from JUST FOR THE RECORD
Written by Benny Andersson, Bjorn Ulvaeus & Tim Rice

The Broadway Album is one of the milestones of Barbra Streisand’s illustrious career. Released in November 1985, this stunning collection of classic show tunes reached #1 on Billboard’s Top 200 and went on to sell over four million copies in the US and about eight million worldwide.

LUCK BE A LADY

from BACK TO BROADWAY
written by Frank Loesser