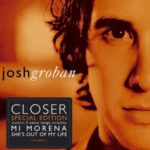 The fall 2001 release of Josh Groban was the introduction of the Los Angeles-born baritone to the music world. David Foster crafted the now-classic release that beautifully showcased Groban’s terrific vocal talent. Yet, Warner Bros., the owner’s of the Reprise label that Josh Groban was on, showed hesitation to sign the future superstar. Warner was unsure that the young Groban’s voice and music style would become winners on the charts and radio.

MY HEART WAS HOME AGAIN

from WITH YOU
written by Marc Jordan & Stephen Moccio

The beginning of 2007 saw the release of a special Valentine’s Day project by international recording star Josh Groban. This eight track compilation CD was titled “With You” and was sold exclusively at the Hallmark store chain. “With You” included previously released material personally selected by the baritone superstar like “You’re Still You,” “Broken Vow,” “When You Say You Love Me” and “Per Te.” This romantic tour-de-force also presented a couple of beautiful, unreleased songs – the title track and “My Heart Was Home Again.”

YOU RAISE ME UP

from YOU RAISE ME UP (Radio Edit)

“You Raise Me Up” is an inspirational song originally composed and performed in 2002 by Irish/Norvegian duo, Secret Garden. The song was brought to worldwide recognition by Josh Groban who recorded it, in 2003, for his second album, Closer. “You Raise Me Up” was the hit single off that album reaching the top of the adult contemporary chart where it stayed for six weeks. It was also Groban’s first entry on Billboard’s Hot 100 at #73 and it was eventually nominated for a Grammy as “Best Male Pop Vocal Performance.”