STOP ME FROM STARTING THIS FEELING

From STOP ME FROM STARTING THIS FEELING (single)

The late Lou Rawls was one of the most important Soul/Blues singers of the Sixties and the Seventies. His legendary baritone caressed generations of fans on a string of hits that included “Love Is A Hurtin’ Thing,” “You’ll Never Find Another Love Like Mine,” “Lady Love” and “Your Good Thing (Is About To End).”
In the Eighties, Rawls, like many of his contemporaries, saw his popularity slip a little in favor of other gifted singers like Al Jarreau and George Benson. In 1986 he tried a comeback album produced by Jay Graydon, the mastermind behind Jarreau’s triumph. The record, “Love All Your Blues Away,” was half contemporary R&B and half traditional Pop/Jazz. Although the material presented is all very good, it sounds a bit dated today. At the time, Graydon tried to contemporize his style with heavy use of programmed drums and synthesizers and lost a bit of the magic that his Jarreau material showcased. The quality of the original songs is so high that it still makes for a pleasant listen and the evergreens that fill the second half of the album are all beautifully presented and performed.

Graydon enlisted his usual team of musicians, co-writers, arrangers and co-producers, the cream of the quality Pop mafia like his pals, David Foster, Richard Page, Tom Keane, Bill Champlin, Robbie Nevil, Jeremy Lubbock and many others. Foster, Graydon and Page co-wrote the fantastic ballad, “Learn To Love Again,” sung by Rawls with Tata Vega. It would be one of the last songs that the legendary singer brought to the R&B single chart. Foster also co-wrote with Keane and actor/songwriter Alan Thicke a wonderful up-tempo number entitled “Stop Me From Starting This Feeling.” Arranged by Foster and produced by Graydon, it is one of those feeling good gems that Foster so often crafted in the Eighties. The track is beautifully handled by Rawls with his familiar style and confident performance while the backing track is 100% Foster with his bass synth, drum programming and piano playing. “Stop Me From Starting This Feeling” was also released as a single, but didn’t make the charts. It is very popular among the fans of the most sophisticated Pop/R&B. 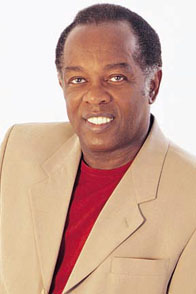