The special musical partnership between Italian superstar Andrea Bocelli and legendary super-producer David Foster started at the end of the nineties when the operatic tenor put his signature voice to Foster’s modern classic “The Prayer.” The two music icons built a strong friendship in the new millennium with Foster producing a string of wildly successful traditional pop works for Bocelli and appearing with Bocelli at several ensuing concert events broadcasted on television and eventually released on DVD. At the end of last year, they started working on the new Bocelli project that will be released internationally this week.

Cinema is a new collection that presents a stunning number of renowned themes from award-winning movies including West Side Story, Doctor Zhivago, The Godfather, Il Postino and Breakfast At Tiffany’s. For this occasion, Foster again joined forces with his old partner and world-class engineer/producer Humberto Gatica and veteran Italian music-maker Tony Renis. The three were responsible for Bocelli’s 2005 milestone cd Amore. Foster and Gatica jokingly remarked that Cinema represented their third musical marriage and, once again, the result is a musical work of art. Bocelli, who comfortably sings in five different languages, gives a string of magnificent vocal performances that are a listening pleasure. The instrumental canvas, fueled by the orchestral genius of arrangers supreme William Ross, Chris Walden and Vince Mendoza, are a total knock-out. And, Gatica’s sound architecture demonstrates why he is considered one of the best ears in the business.
“Historia De Amor” from Love Story has been picked for this weekly review. Found on the deluxe edition of Cinema, “Historia De Amor” is just one bright gem out of the many included on the cd. The bossa-nova instrumental scenario was suggested by Gatica and beautifully crafted by Mendoza. The result is pure bliss with its refined South-American feel and enchanting orchestral accompaniment. Foster plays the soothing piano while Leonardo Amuedo does a wonderful job with the acoustic guitar. The rhythm section also includes two other world-class talents like Vinnie Colaiuta on drums and Chuck Berghofer on bass. And Bocelli? The Tuscany-born superstar gives an understated yet gorgeous vocal performance. There are other tracks on Cinema that showcase Bocelli’s powerful tenor, but on “Historia De Amor” he gives the listener a chance to savor the subtle nuances of his unique voice and the full magic of such a God-given talent. We can easily predict that Cinema will be another worldwide smash for Bocelli and his all-star team of producers.
Recently, a special concert showcasing the new cd was recorded at the Dolby Theatre in Hollywood . The show featured Bocelli and Foster alongside silver screen giants including John Travolta, Andy Garcia and Ryan O’Neal. This event will be aired on US television at the end of November. Later on, the performance will be released on DVD for the joy of Bocelli’s legion of fans around the globe. 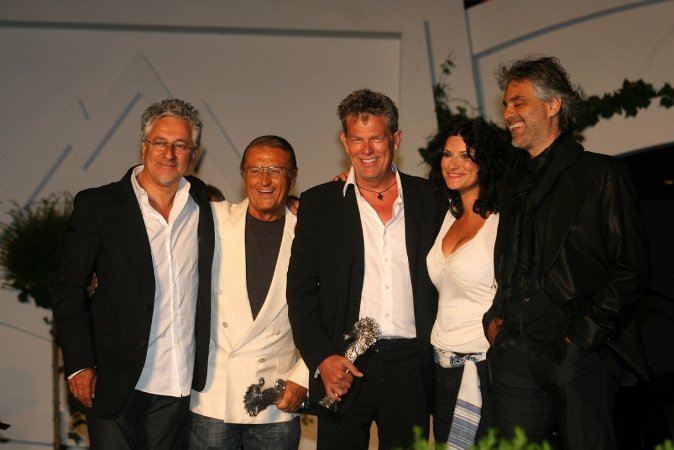