NOTHING YOU CAN DO ABOUT IT

From FLY AWAY – The Songs Of David Foster
Written by David Foster, Jay Graydon & Steve Kipner

This week, the spotlight is again put on Fly Away – The Songs Of David Foster. This fantastic tribute cd was released in 2009 by Spanish independent label Contante & Sonante. It featured a series of famous Foster co-writes revisited by Tomi Malm, the ultra-talented Finnish music-maker. Malm had the help of a long list of world-class singers and musicians from many corners of the globe. Malm breathed new life into some trademark Foster pieces including “Whatever We Imagine,” “In The Stone,” “Through The Fire,” “Jojo” and “The Colour Of My Love.” He showcased his creative genius in the refined craft of the arrangements and the deluxe level of the production.

One of the pinnacles of Fly Away – The Songs Of David Foster was the magnificent rendition of the Airplay classic, “Nothing You Can Do About It.” Co-written by Foster with Jay Graydon and Steve Kipner, this mid-tempo pop masterpiece was also recorded by The Manhattan Transfer in 1979 for their seminal Extensions album. For his version, Malm kept the horn-driven power of the original and added a strong jazzy flavor to the atmosphere. The Swedish singing sensation Frank Adahl delivered some amazing vocals with his lead and harmonies going right into the stratosphere. The tune was enriched by the terrific Danish All Star Horns directed by trumpeter Jan Glaesel whose inventive arrangement rivals Jerry Hey on Airplay’s version. The icing on the cake was Graydon’s elegant guitar solo. Graydon reminded us of his unique feel and superior technique. His solo was an updated dead-ringer of the one he did on the original version. “Nothing You Can Do About It” also featured Malm and Lenni-Kalle Taipale on keyboards, Aidan Zammit on synths, Soren Reiff on guitar, J.R. Robinson on drums and Neil Stubenhaus on bass. Their fantastic jam was an absolute treasure for the lovers of quality pop and a total knock-out thanks to Malm’s incredible work.

Tomi Malm has written a few words about this incredible experience:

“Ten years ago, I was approached by Contante & Sonante to produce a tribute project of David Foster’s songs. At first I had some reservations because the original versions were already perfect . However, after some consideration, I finally accepted the challenge.

“Nothing You Can Do About It” is one of my favorites of Foster’s vast catalogue and I first did a quick, simple demo of it with pianist Taipale. Afterwards, the song went through many twists and turns as I wanted it to be perfect. I actually thought about arranging the song in big band swing style. That would have been cool. Eventually, it took many musicians & two years to make. At some point we even had five or six guitarists trying different guitar parts until we got it right. For rhythm section we got LA’s finest and JR & Stu played as only they can. For vocals we had one of the best singers I’ve ever worked, Swedish Frank Ådahl. That guy is a monster and deserves all the praise he gets. And the Danish Allstar Horns directed by Jan Glaesel showed us how “class A” brass section can sound when it’s done right. Of course, Jay played a solo with his unmistakable style, even quoting the original solo.

When I look back, I feel grateful and humbled by this opportunity. This version couldn’t have happened without all these giant talents who gave it their best. No compromises were made at any stage.”

Malm is currently working on his first solo cd with the invaluable help of Gabriel Raya’s Contante & Sonante. His cd should be out sometime in 2016. It will show more evidence of the Finnish music-maker’s amazing talent and will be a must-have for quality pop lovers everywhere. 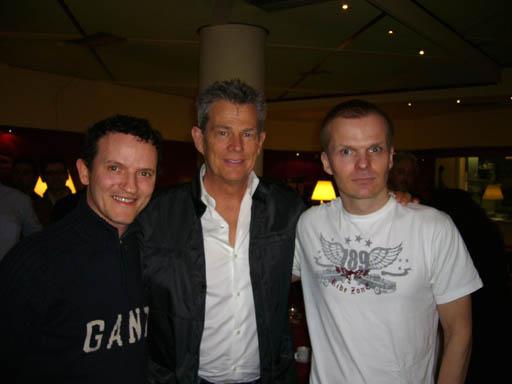 Nothin’ in the world can stop it now.
It’s in control,
We might as well just try to stop the wind.
Give up!
Give in!
You lose!
Love will always win.
Start surrendering:
Stop resisting!

Destiny!
We are what fate intended us to be.
Can’t you see?
We’re all a part of some eternal plan
So give up!
Give in!
You lose!
Love will always win.
Start surrendering, oh!
Stop resisting!