TIP OF MY TONGUE

From THE BEST OF THE TUBES
Written by The Tubes, Michael Snyder, Maurice White

In 1983, after the huge success of their previous album, “The Completion Backward Principle,” The Tubes released “Outside Inside,” another catchy offering again with David Foster at the helm. Foster, who was responsible for making the band’s sound more suitable for rock and pop radios, brought in many of his friends from Toto plus other session greats like Nathan East and, Freddy Washington to help raise the level of  musical sophistication in the Tubes sound. The voices of Patti Austin, Bobby Kimball and Bill Champlin were also smart additions to support Fee Waybill’s strong vocals. The overall sound of “Outside Inside” was a slick mix of rock and funk. It included a series of gems like “She’s A Beauty,” that zoomed to the top of the charts, the powerful “No Not Again” and the classy up-tempo “Fantastic Delusion.” The second single was “Tip Of My Tongue,” a tight, funky affair co-written with Maurice White who also sings some uncredited ad-libs. This song definitely echoes the sound of Earth, Wind & Fire. Sure the lyrical content fully belongs to the best Tubes’ tradition, but musically it could have come off any EWF album of those years. “Tip Of My Tongue” was another entry on Billboard’s Hot 100 as was “The Monkey Time,” the final single from “Outside Inside.” “The Monkey Time,” a Curtis Mayfield cover, is an up-tempo soulful duet between Martha Davis and Waybill.

There’s a comprehensive 1992 compilation entitled “The Best Of The Tubes.” It includes all the hits and best album tracks from the two Tubes records of the Foster era plus b-sides and rarities. 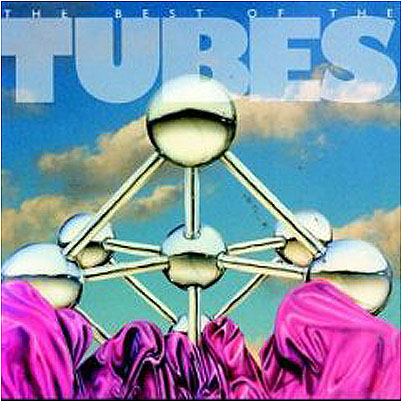 ou somehow knew we’d meet again.
Now I understand.
If I look surprised don’t be alarmed,
I’ve got you, in my arms.
I can almost taste it, and when I can,
(I won’t waste the chance).
Just a lick away,
(Oh so close)
and baby there’s one thing I know…

My heart speaks but the words play
on the tip of my tongue…
and no matter
what my lips say, you are still the only one.

Never been too cunning, I’m no linguist,
but I can tell you this —
Ever since I left you I’ve been lost,
I’m walking in a fog.
We can lick this problem;
we can work it out.
Don’t be impatient, and don’t you run,
’cause I want you on the tip of my…
I can’t find the words.
My lips are on their own,
and my speech is slurred…
can’t even talk on the telephone.
I’ll take a tip from you.
You say my french is pretty good,
so that’s what I’ll use…
If I could!