From THE MIRACLES
Written by Griffin, Moore, Griffin

The Miracles is one of the most successful vocal groups in the history of soul music. In the early seventies the group suffered the departure of the legendary Smokey Robinson who went solo. A new lead singer, Billy Griffin, was added to the line-up as The Miracles kept touring and releasing new albums that spawned more hits like their 1976 # 1 “Love Machine (Part 1).” In 1977 the group left Motown and signed a new deal with Columbia Records. Two records followed with little chart success but the second one, released in 1978 and simply entitled “The Miracles,” reserves great musical interest cause it was completely arranged by an up’n’coming music-maker, David Foster. The young Canadian talent brought a high level of sophistication to the sound with classy musical ideas and refined instrumentation. Among the tracks where Foster’s thumbprint are pretty evident there are the two smooth ballads “The Magic Of Your Eyes (Laura’s Eyes)” and the stunning “Sad Rain.” On both songs the group’s vocals are surrounded by lush strings and Foster’s delicious work on his liquid fender rhodes. There are also several dance numbers like “Mean Machine” that was a minor hit on the r&b chart in 1978 and the good disco opener “I Can’t Stand It.” Foster’s smart arrangements give spark and life to an album that suffers mostly for the not so exciting level of the up-tempo material co-written by Griffin and Pete Moore . Stevie Wonder also appeared on the album playing keyboards as well as Nathan Watts and Raymond Pounds, the famous rhythm section of Wonderlove, 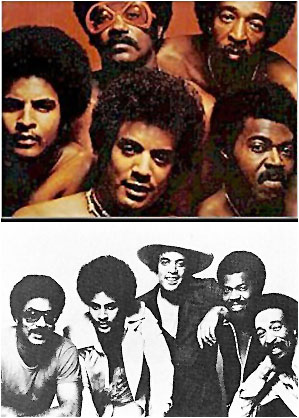