The former Airplay member was suggested for the job by his bandmate David Foster who had to turn down Jarreau’s production offer. Graydon and Jarreau went on to craft a string of masterpiece albums that were bestsellers as well as Grammy darlings. Foster co-wrote a few evergreen hits with Graydon and Jarreau like “Mornin’,” “Save Me,” “After All” and added his golden keyboard touch to many tracks.

One jewel from This Time was the aforementioned “Gimme What You Got,” a sophisticated ballad co-written by Jarreau with his then-musical director, Tom Canning. The sparkling musical architecture conceived by Graydon was delivered by Foster on the acoustic piano, Canning on Fender Rhodes, Michael Omartian on synths, the late Carlos Vega (December 7, 1956 to April 7, 1998) on drums, Abe Laboriel on bass, Graydon taking on the rhythm guitar and unmistakable flugelhorn licks by Jerry Hey. “Gimme What You Got” also sported a fantastic vocal performance by Jarreau. Although Jarreau had jazz beginnings, he proved himself a masterful pop/r&b singer. The song’s splendid melody, memorable hook and irresistible beat deserved to be a hit single, yet it still managed to reach #63 on the R&B charts. The songs parent album became a multi-format hit for the singer, reaching the Top 40 on Billboard’s 200 at #27, #6 on the R&B Album chart and #1 on the Jazz chart.

To round out this review, here are a few lines that David Foster dedicated to the late vocalist:

“The first time I saw Al was in a small club in the valley. The place was packed! This was way before his first recording. Al was mesmerizing, doing incredible stuff that was completely new to me. Later on, his relationship with Jay Graydon became a milestone. They were made for each other. Jay’s amazing pop and jazz skills fit perfectly [with] the music that Al wanted to do and the audiences he wanted to reach. Neither of them compromised and the results were stunning, album after album. I am so proud to have been part of those recordings, but it was Jay and Al who directed the flow and decided the direction. Very few jazz artists have ever walked that comfy in the jazz, r&b and pop worlds the way that Al did for so many decades.” 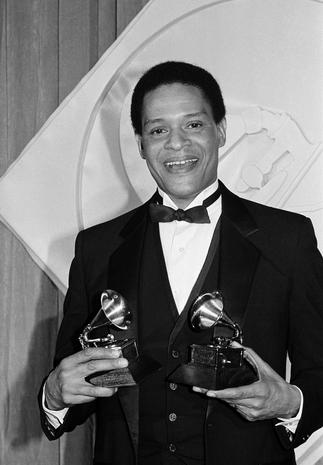 Ahead of us is stormy weather
We’ll cuddle up and stay together
Finally a symphony (will sing)
And sing it one more time.
Don’t resign.