A few weeks ago, we wrote about Skylark’s 1972 hit, “Wildflower.” One of the first people to listen and fall in love with the demo of Skylark’s “Wildflower” was Barry De Vorzon. He was a high-profile personality at the time in the Los Angeles music business. De Vorzon pushed David Foster and other Skylark members to move to California as De Vorzon worked his contacts to try and get Skylark a recording contract. Many years later, Foster wrote in his autobiography, “Hitman: Forty Years Making Music, Topping The Charts, and Winning Grammys,” to acknowledge De Vorzon’s role in helping Foster’s life take a fundamental turn on its way to success.

De Vorzon was a man of multiple talents as singer, songwriter, arranger and producer. One of his main achievements was the instrumental “Nadia’s Theme” that was associated with Nadia Comăneci, the 14 year old Romanian gymnast who scored the first perfect ten during the 1976 Summer Olympics, and the US TV soap opera, The Young and The Restless. Co-written with Perry Botkin, Jr., that evocative melody reached #8 on 1976’s` Billboard’s Hot 100 and won De Vorzon a Grammy Award for Best Instrumental Arrangement. The New York City-born music-maker also composed several scores for movies and TV shows including The Warriors, Xanadu, Private Benjamin and S.W.A.T.; collecting six Emmys and an Academy Award nod.

“Nadia’s Theme” was included in an album aptly titled Nadia’s Theme – The Young and the Restless. Foster was one of the many gifted musicians enlisted for the sessions. His piano and keyboards can be heard throughout the recording along with Dean Parks, Jay Graydon and Lee Ritenour on guitars, Ernie Watts on sax, Harvey Mason on drums and several other world-class talents. Among the highlights on the album included the opener, “Jelinda’s Theme,” another gorgeous, piano-lead composition that Foster covered approximately twenty years later on his Love Lights The World cd. This beautiful rendition was more evidence of the influence that those De Vorzon instrumentals had on the young Canadian musician.

Another stand-out track and the pick for this week is a refined instrumental piece titled “Shadows.” This tune sports a terrific, pop/soul arrangement with a Latin-tinged beat not far from Burt Bacharach’s sophisticated territory in those days. Strings and synths lead the dance supported by elegant piano and saxophone performances in a refined musical landscape. Although dated in its overall sound, “Shadows” is a terrific composition and a testament to De Vorzon’s body of work that may get unfairly overlooked. “Shadows” also became the b-side of “Nadia’s Theme.” 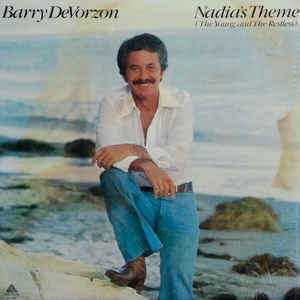