This week, the focus is on a goodie from another smart reissue by the UK label, Cherry Red Records. For the first time ever on compact disc, this enterprising independent record label re-released the rare, self-titled album by soul/R&B legends, The Miracles. Originally cut on Columbia Records in 1978, the October 2012 cd, The Miracles, became a sought-after item by fans and soul music lovers alike for its very limited availability generated by a dispute between the group and Columbia Records’ executives. Consequently, The Miracles was released only in The Netherlands with a few import copies making their way to the US where the album never officially saw the light of day.

One song on The Miracles, “Mean Machine,” was co-written by band member and producer Pete Moore, band singer Billy Griffin with his brother, guitarist Donald Griffin. “Mean Machine” was issued as a single early in 1978. This irresistible, mid-tempo jam became a minor hit on the R&B charts at #55. “Mean Machine” was arranged, like the whole parent album, by the uber-talented David Foster. The up ’n’ coming music-maker cooked a rare groove with a smokin’ backing track that resembled his contemporary work on Bill Champlin’s classic R&B tune, “I Don’t Want You Anymore.” Placing the arrangement of “Mean Machine” in the capable hands of Billy Griffin, Pete Moore & Co. resulted in pure ear-candy magic. Griffin showed his strength by spotlighting his great voice and was backed up by The Miracles’ trademark vocal harmonies. The instrumental feel of the track was on the same wavelength of refined jams by funk greats like The Commodores and Kool & The Gang. The rhythm section was comprised of the members of Stevie Wonder’s Wonderlove together with Foster on keyboards. “Mean Machine” was embellished by an uncredited sax solo and superior work on the slamming horns by renowned arranger Wade Marcus. If you want read more about The Miracles and listen to Foster’s arranging bravura on this project, click here for a review of the haunting ballad “Sad Rain.” 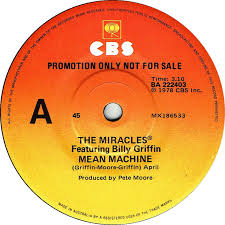