William Joseph is a piano virtuoso who was discovered by David Foster and signed to Warner Brothers back in 2004. His first album, “Within,” gained immediate attention from fans for his fusion of classical and new age music with a catchy pop twist.

Foster oversaw Joseph’s debut CD that echoes the producer’s critically acclaimed solo albums of the eighties. To give the talented pianist/composer more exposure, Foster often enlisted him on his charity shows and on last year’s very successful “Hitman: David Foster & Friends.” There Joseph performed a fantastic instrumental entitled “Asturias” from his new album, “Beyond.” This second offering was released in the spring of 2008 and again produced by Foster. “Beyond” continued the winning combination of classical/new age material mostly co-written by Joseph. It showcases Joseph’s absolutely remarkable piano performances while highlighting his romantic side on the more emotional numbers.

Foster co-wrote the title track and some of the album’s more tender moments like “Once Upon Love,” “Sweet Remembrance Of You” and the flamenco-inspired “Apasionada.” He even showcased his piano playing along side Joseph on “Once Upon Love.” “Beyond” includes perfect covers of Ennio Morricone’s “Cinema Paradiso” and Led Zeppelin’s anthem, “Kashmir.” It also includes “Heroes,” written by Joseph and a finalist for the 2008 Beijing Olympics theme. Among the names involved in the project were guitarists Jesse Cook and Ramon Stagnaro, violinist Lucia Micarelli and arrangers extraordinaires Jochem van der Saag, Chris Boardman and William Ross. The album reached #6 on Billboard’s Top Classical/Crossover chart. 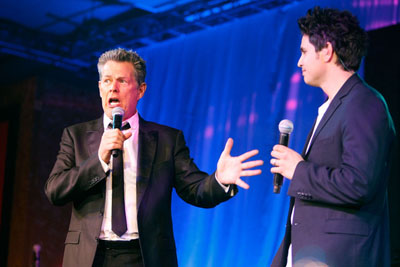