From THE BEST OF JENNIFER HOLLIDAY

Jennifer Holliday is a Grammy and Tony winning singer most famous for her show stopping performance of “And I Am Telling You I’m Not Going” from the hit Broadway musical Dreamgirls.

Although not her first Broadway role, her portrayal of Effie launched her career and the subsequent four solo albums that are featured on her 1996 release, “The Best Of Jennifer Holliday.”  David Foster played a major role in Holliday’s early career. First he produced the platinum selling original soundtrack for Dreamgirls that won “Best Musical Show Album” in 1982. He went on to co-write “I Am Love” with Maurice White and Allee Willis, a gorgeous ballad that became another smash hit for the singer in 1983. “The Best Of Jennifer Holliday” also includes “I Am Changing,” another hit from Dreamgirls and again produced by Foster. “I Am Changing” is a pearl that gives the listener the chance to appreciate the singer’s unique voice and passionate performance. The song was released as a follow-up single to “And I Am Telling You I’m Not Going” and reached the R&B Top 30. Through the years, “I Am Changing” has become a standard in its own right with several cover versions including Jennifer Hudson’s on the movie soundtrack. “The Best Of Jennifer Holliday” is chock full of great music including the White produced dance goodie “Just Let Me Wait” and the fantastic ballad “Say You Love Me” produced by Tommy LiPuma. 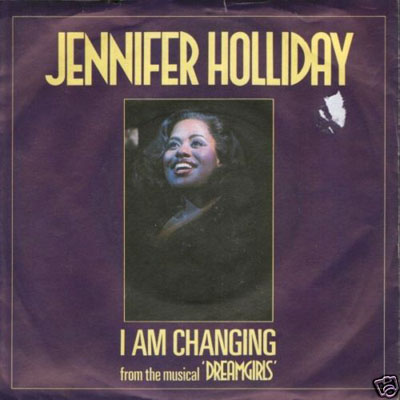 I am changing, seeing everything so clear now
I am changng, I’m gonna start right now, right here
I’m hoping to work it out, and I know that I can
But I need you, I need a hand

Walking down that wrong road, there was nothing I could find
All those years of darkness-can make a person blind
But now I can see

I am changing, tryin every way I can
I am changing, I’ll be better than I am
But I need a friend-to help me start all over again,
oh-that would be just fine
I know it’s fonna work out this time
‘Cause this time I am-This time I am

I am changing, gonna get my life together now
I am changing, yes, I know how
I’m gonna start again, I’m leaving my past behind
I’ll change my life-I’ll make a vow
And nothing’s gonna stop me now…hey