From BLOAT ON/JUST SAY “RIGHT ON” (THE BLOATERS’ CREED) (single)

Richard “Cheech” Marin and Thomas Chong, best known as Cheech & Chong, was a very successful comedy duo through the Seventies and Eighties with their comedy albums and stand-up performances based mostly on the hippie movement and underground drug culture.

Cheech & Chong also released a few movies that helped build their cult status among fans. Their Seventies records like “Los Cochinos,” “Big Bambu” and “Cheech & Chong’s Wedding Album” all reached the top five on Billboard’s albums chart. “Los Cochinos” also gave the duo a Grammy as “Best Comedy Performance Single or Album, Spoken or Musical.” Cheech & Chong had several hits on Billboard’s Hot 100 with their hilarious singles including “Santa Claus And His Old Lady” and “Earache My Eye.”

In 1977 they released a new single entitled “Bloat On.” It was an extremely funny parody of the Floaters’ R&B single “Float On” that was one of the bigger hits of that year. “Bloat On” features the two comedians singing and chatting over a wonderful, smooth instrumental performance courtesy of David Foster. Foster produced and arranged the track that was another Billboard’s Hot 100 entry for the duo reaching #41. It was Foster’s second appearance as producer on that chart after debuting with The Keane Brothers’ “Sherry” in 1976. “Bloat On” was later included on Cheech & Chong’s 1980 album “Let’s Make A New Dope Deal.” 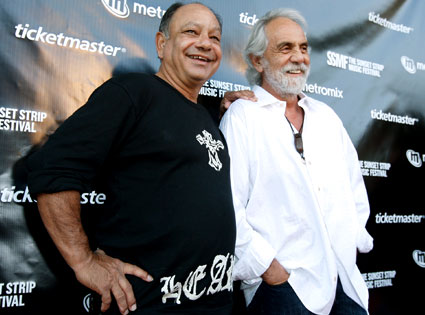 A hamburger that gets on
Everything and everybody
A burger with nice, soft
Warm browm buns

What’s that you said, honey
Hold the pickle
Hold the lettuce
Say, baby, hold your mouth
I want it my way

Mmm, take my hand
Come with me, baby
To Burger Land

I like chocolate and vanilla
And mocha but, ooh
My favorite is licorice

Mmm, baby, if y’all wanna
Share some sugar with sugar
Just reach out

Ooh, take my hand
Come with me, baby
To Sugar Land

So take it on ov… well
Bring it back on over here
(Bloat, bloat on)
Maybe I’ll just have a few licks

Also, I like a sweet and sour
Number two combo with
A two seven uppee