In 1974 Skylark disbanded and David Foster immediately began his career as a top studio keyboard player in L.A. During those first years he played on albums by Lynyrd Skynard, Keith Moon of the Who and George Harrison. In 1975 he was given the chance to co-produce Bruce Miller’s “Rude Awakening.” Miller was a Canadian singer/songwriter whose folk/rock music was following the footsteps of acts like the Eagles, Poco and Jackson Browne. Foster co-produced “Rude Awakening” with another compatriot, Gaye De Lorme, a very talented guitar player. Though the album remains a best kept secret, Foster’s arrangements for the record clearly show his developing talents.

Miller co-wrote the bulk of the album. He sang the songs with conviction while playing the acoustic guitar and fiddle. Among the songs there’s the nice opening number, “Summer Of Our Love,” that features some fine sax work by Tom Scott. The title track sports a good beat and an effective refrain with interesting guitar work by De Lorme and Foster on clavinet. There are other big names in the lineup including Poco member Rusty Young, famous Brazilian percussionist Airto Moreira, bassist Lee Sklar and drummer Jim Keltner who played with Foster in the group Attitudes. “Rude Awakening” was engineered by Keith Olsen who would become another top-notch music maker. He enlisted Foster to play on several of his productions of that era. After “Rude Awakening.” Miller continued his career in the music biz, co-writing hit songs for big country names like Reba McEntire and the Dixie Chicks. 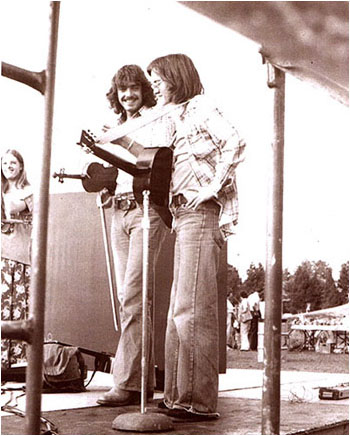