SO IN LOVE WITH YOU

Universal Nubian Voices was an early nineties R&B quartet that followed the footsteps of famous acts like Boyz II Men and Take 6. After making some noise in the Detroit area with their first song “Something’s Goin’ On,” they were signed in 1993 by Madonna’s Maverick Records label. Initially, “Something’s Goin’ On” was released as a single nationwide and became a smash hit, reaching #29 on Billboard’s Hot 100 and #3 on the R&B chart. They went quickly back into the studio to work on a full album aptly titled “Something’s Goin’ On.” In a just a few months, the album helped build up their name as a new, hot R&B act by reaching the top ten on the R&B charts.

In 1995 the group started working on their sophomore album with famed music makers like Brian McKnight, Michael J. Powell and David Foster. The album, simply named “U.N.V.,” was another very good showcase of the group’s superior vocal harmonies enhanced by the skilled guidance of talented producers. Foster helmed and co-wrote a sweet love ballad with Linda Thompson and Bill Ross entitled “So In Love With You.” This song is a delicate, intense wedding melody that was beautifully executed by the group. Foster added all his usual winning elements with a special eye on the smooth vocal performances and the grand orchestral arrangement. “So In Love With You” was another minor hit for U.N.V. and reached #65 on Billboard’s Hot 100. There’s also an effective R&B remix of the song that ends the album. Other songs of note on “U.N.V.” are “One More Try” and “First Time,” both McKnight offerings co-written with Brandon Barnes and Robin Thicke respectively. 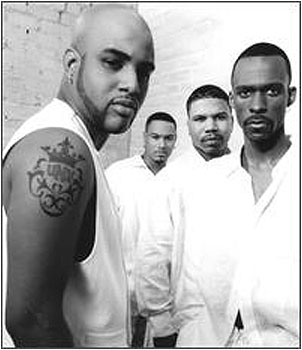 I will stand before God
Give you all that I’ve got
I can promise you I’ll be true
I reveal here and now
As we both take this vow
I am so in love [So in love], with, with you (Ooh, hoo…)

Words can’t express
What I confess with each beat of my heart
I’m overwhelmed
With a passionate affair from the start, oh…

Our love will grow
As the years come and go, I will be by your side, oh, yes, I will
There isn’t anything
That I would deny

I will stand before God
Give you all that I’ve got
I can promise you I’ll be true
I reveal here and now
As we both take this vow
I am so in love, I am so in love with you