WHAT CAN I SAY

Chicago 16 is a pop masterpiece, there’s no doubt about it. It is a classic album and the band’s first collaboration with David Foster. In 1982 the guys in Chicago were living a deep crises with their last album, Chicago XIV, being a huge commercial disappointment. They needed a new, creative force to try and come back and Foster fit that role perfectly. He knew they had very good talent and one of the best singers in the business, Peter Cetera, so he focused on that voice trying to write songs with them to showcase it and also bring out again the many different sides this band always had. He co-wrote most of the album, bringing in some of his friends like the Toto guys at the peak of their success and finding his old pal, Bill Champlin, as part of the line-up (Champlin remembers that when they met in the studio for the sessions Foster jokingly told him: “hey I thought I just got rid of you”).

The record is flawless with energetic pop/rock numbers like “What You’re Missing” and “Follow Me”, pop/jazzy moments like “Bad Advice” and good r&b like “Sonny Think Twice”. This is the record of “Hard To Say I’m Sorry” one of the sweetest and most famous ballads ever but we picked another song as our “song of the week”, the soft, up-tempo “What Can I Say”. Written by Foster and James Pankow, it has Cetera at his vocal best, Foster playing his variety of keyboards and arranging the piece, Pankow taking care (as always) of the horn charts and also playing the tender trombone solo. This song really exemplifies why Chicago and Foster were an artistic and commercial success, no wonder Chicago 16 became a platinum seller and it also definitely established Foster as a top producer as well as rebounding Chicago at the top of the charts. 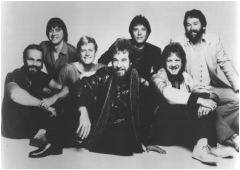 Lonely nights;
Empty days, use me up so many ways.
You came along and stole my heart away.
I just wanna hold you darlin’, tonight,
knowin’ that the love between us is right.
I can’t believe that you’d ever let me go; oh, no.

CHORUS:
What can I say?
What can I do?
I’m so in love with you.
Got to be strong;
but, for how long must I have this feeling?
Won’t go away.

Take me back to yesterday,
I just wanna fade away
Closer to you that what we used to be.
Are we really gonna let it die?
Close the book and give it one more try.
I can’t believe that you’d ever let me go; oh, no.