AND THE MELODY STILL LINGERS ON

This isn’t just a song, it is a true musical event. In 1981, Chaka Khan and her producer Arif Mardin decided they wanted to pay a tribute to the great jazz players that have influenced black music’s world to this day. They wrote brand new lyrics to the classic jazz tune, “Night In Tunisia” and called an all star line-up of musicians to play on it. Mardin’s arrangement is superb, he has just won a Grammy this year for his work with Norah Jones but his career goes way back from working with, among others, Roberta Flack, Aretha Franklin, the Average White Band and Chaka. He reworked this jazz pearl adding a contemporary vibe to it, putting a funky spin using Chaka’s unique voice. Chaka Khan is a singer in her own league, together with Aretha Franklin she’s one of the most powerful and talented singers ever and this song is one good proof of this statement.

The ice on this cake are the guest spots of the song’s co-writer (and jazz legend) Dizzy Gillespie, Herbie Hancock on the clavitar solo and Foster that drives the rhythm section ( together with Abe Laboriel and Casey Schelierell) with his mini moog bass and also plays some delicious prophet 5 synth to add some more colour to the groovin’ rainbow. At the end of this song another surprise is the brief Charlie Parker’s sax solo that was taken from the original recording of this classic. Foster and Chaka have worked together again, in 1984, when Khan sang Foster’s “Through The Fire” in her “I Feel For You” album, you can listen to that timeless ballad as one of the 5 songs in our “Poll” on this website. 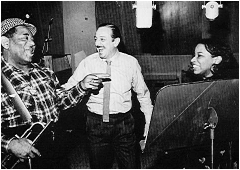 A long time ago in the 40’s
Dizzy and Bird gave us this song
They called it “A Night In Tunisia”;
And the melody still lingers on

They paved the way for generations
From Coltrane to Stevie
No one could stop the winds of change
Without them where’d we be?

The Duke and the Prez were there before
The past you can’t ignore
The torch is lit, we’ll keep the flame
And the melody remains the same