LUCK BE A LADY

from BACK TO BROADWAY
written by Frank Loesser

The Canadian super-producer crafted eight songs for the album that skyrocketed to the top of the charts and certified “Back To Broadway” as double platinum. Streisand was vocally at the top of her game, but so was Foster who also produced other giant sellers like “The Bodyguard” soundtrack for Whitney Houston and “The Colour Of My Love” for Celine Dion around the same time. Foster’s incredible, high-tech production and his terrific work with gifted arrangers like Jeremy Lubbock and Johnny Mandel created a true work of art and brought new life to a series of unforgettable Broadway classics. “Back To Broadway” also got two Grammy nominations as Best Traditional Pop Vocal Performance and Best Pop Vocal Performance, Duo or Group for the song “The Music Of The Night.”

Although many songs were notable on “Back To Broadway,” a couple of beautiful tunes stand out. “Some Enchanted Evening,” arranged by Foster and Mandel, and “Luck Be A Lady,” arranged by Lubbock, got a 1994 Grammy nod as Best Arrangement Accompanying Vocals. Foster and Lubbock were on a creative roll and basically stole the category that year. They were nominated for Houston’s “I Have Nothing” and took the award for Celine Dion’s “When I Fall In Love.”

It’s impossible to pick just one song from this fantastic release. The jazzy, horn-driven and festive take on Frank Loesser’s “Luck Be A Lady” won our attention. Everything on this number is noteworthy; from Streisand’s top-notch vocal performance to Lubbock’s extraordinary work and Foster’s absolutely perfect production. This song shows Foster’s unique ability to modernize a classic tune without losing its original power and value.

1994 saw a triumph for Foster as Producer Of The Year for the third time in his career thanks to “The Bodyguard” wild success and his fantastic work on both “The Colour Of My Love” and “Back To Broadway.” Kudos Mr. Foster, kudos. 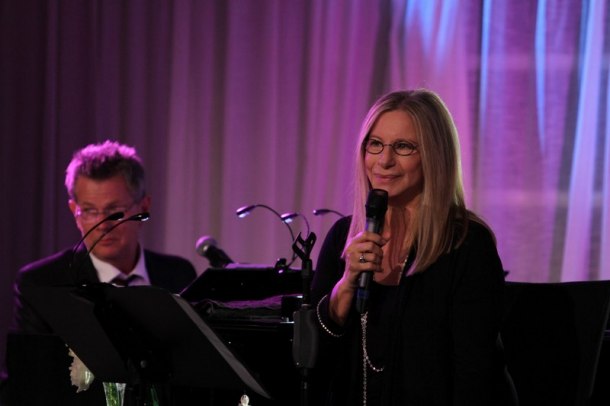 Luck how I’m longing to see
How good a friend you can be
Stick with me sister, I’m the one that you came in with
Luck be a lady with me

A lady doesn’t leave her escort
It isn’t fair, it isn’t nice
A lady doesn’t wander all over the joint
And blow on some other guy’s dice

So, let’s keep the party polite
Hmm
Never get out of my sight
Stick with me sister
I’m the gal that I came in with
Luck be a lady tonight

A lady wouldn’t flirt with strangers
She’d have heart, she would have a soul
A lady wouldn’t make little sneak eyes at you
When I’ve bet my life on this roll