At the dawn of the new millennium, David Foster basically invented the Josh Groban phenomenon. The legendary hitmaker was looking for a singer that could fill Andrea Bocelli’s adult pop slot. The young and talented Groban fit that crossover role like a glove and he went on to sell millions of Foster-produced cds. As a consequence, all the record companies worldwide started to sign operatic singers, hopeful to surf that successful wave. A plethora of Groban/Bocelli sound-alikes released albums, but only a few had good results sales wise and many of them faded away in the blink of an eye.The pop/opera crossover field also gave birth to a number of vocal groups that were classically trained versions of hit boy bands like ‘N Sync or Backstreet Boys. Acts like Il Divo, Il Volo, Forte or The Canadian Tenors included remarkably talented, young singers who also had the right looks for today’s music market. Yet, almost all the names of the genre sang the same repertoire made of dramatic evergreens or operatic pieces already mastered by Groban and Bocelli.
The Canadian Tenors distance themselves from the rest of the groups in the “popera” field. Remigio Pereira, Victor Micallef, Fraser Walter and Clifton Murray picked a more refined set of songs, pop and folk with an occasional incursion in the opera/classical arena. Since its inception, the quartet has steadily been on Foster’s radar. The super-producer gave The Canadian Tenors high-profile visibility at his charity events and eventually got them signed with Universal. In 2012, they even shortened their name to The Tenors and signed a deal with Foster’s Verve Records. On their 2008 self-titled debut, The Canadian Tenors delivered great renditions of Foster’s classics like “The Prayer” and “Because We Believe” that showcased the group’s superior vocal harmonies and beautiful lead vocals.

The Tenors’ last release was the 2015 Under One Sky cd. Again, the quartet delivered their effective blend of intense pop and operatic covers plus a convincing set of new songs mostly co-written by the group members. On the deluxe edition, The Tenors presented an enchanting cover of the Eric Clapton gem, “Tears In Heaven,” produced by their mentor, David Foster. Foster crafted a gorgeous arrangement of the bittersweet ballad with the orchestral aid of Chris Walden. Jochem van der Saag co-produced the track and added his state-of-the-art sonic art to it. The vocal quartet shines with great harmonies and tender leads carefully directed by Foster and backed up by his gorgeous touch on the acoustic piano. Though there are way too many acts in the classical crossover field, these four gentlemen have a sparkle and personality that raise them way above their competitors. When you put singers of this caliber in the capable hands of The Hitman, you get a must-listen result. 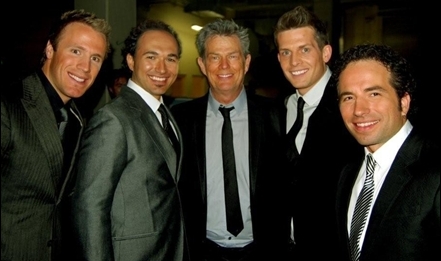