from MAKING OUR DREAMS COME TRUE

In the second half of the seventies, David Foster’s keyboard playing became a fixture on hit records by superstars including George Harrison, Dolly Parton, Barbra Streisand and Rod Stewart. Although the list of artists he played for was impressive, the future Hitman could also be found tickling the ivories on  quite a few pop guilty pleasures. For example, Foster played keys on a string of TV theme songs written by his friend and compatriot Alan Thicke including “The Wheel Of Fortune” and “The Joker’s Wild.”

Foster and his cohort Jay Graydon were found all over the 1975 comedy album “Hi Guys!” by the late actor Ted Knight of The Mary Tyler Moore Show fame. Around 1976, Foster can be seen arranging a disco/pop single by future Charlie’s Angels’ star Cheryl Ladd and playing on the forgettable debut album of singer/actress Lisa Hartman. One of Foster’s first appearances on Billboard’s Hot 100 as a session player happened while playing the synthesizer on the 1976 #1 hit “Disco Duck” by Rick Dees & His Cast Of Idiots.

Another Top 40 hit was “Making Our Dreams Come True” by newcomer Cyndi Grecco. In the summer of 1976, “Making Our Dreams Come True” reached #25 on Billboard’s Hot 100 thanks to its exposure as the theme song of the popular TV show Laverne & Shirley. The song was co-written by the legendary and prolific songwriting team of Charles Fox and Norman Gimbel. Fox and Gimbel co-penned other evergreens including “Killing Me Softly With His Song” and unforgettable TV themes for Happy Days and Angie. Foster played all the keyboards on “Making Our Dreams Come True” alongside other giant players including Mike Baird, Max Bennett, Victor Feldman and Ben Benay. The Fox-crafted tune was extremely catchy with a strong sixties feel and was mixed with a danceable beat fueled with strings, horns and ear-candy harmony vocals. Grecco’s cute voice handled the song reasonably well. Grecco went on to release a full album also titled “Making Our Dreams Come True” that featured a few interesting moments as well as a terrific cast of supporting musicians. Given the good potential of the album, it deserved better luck on the charts, but bombed like the follow-up single “Dancing, Dancing.” Grecco released another album in 1982, but couldn’t find additional chart success and quickly disappeared from the pop scene. 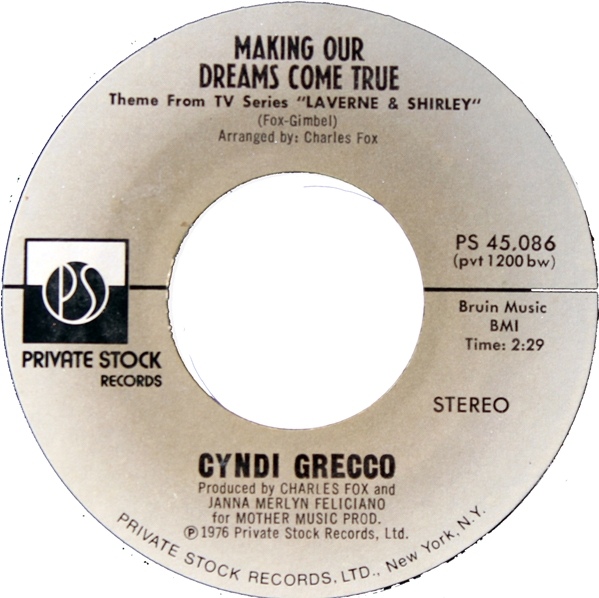 On your marks, get set, and go now
Got a dream and we must know now
We’re going to make our dreams come true