from IS IT YOU? (single)

In 1981, the legendary jazz/fusion guitarist Lee Ritenour released “Rit,” a collection that saw him resolutely pushing towards radio friendly, pop/r&b material. The result was an artistic and commercial success thanks to Ritenour’s superior artistry and his knack to pick the right partners in crime for his adventure. He enlisted his old session mates David Foster and Harvey Mason to support him in the producer’s seat and brought into the spotlight the fresh, new talent of Eric Tagg. Tagg would play a key role on “Rit” with his co-writing and singing talent displayed on the bulk of the album. Bill Champlin provided killer vocal harmonies while the LA session scene cream of the crop crafted the instrumental parts.

This collection presented a mix of Toto-influenced rock, refined pop’n’roll a-la Boz Scaggs and r&b/funk in the best Earth, Wind & Fire vein. Foster produced a couple of pivotal moments including the opener “Mr. Briefcase,” a catchy pop/rock up-tempo that perfectly sets the album’s atmosphere and the gorgeous ballad “No Sympathy.” Both songs were written by Tagg and were shining examples of the best quality pop of that era. For those interested you can find both songs reviewed in our archives. The “Rit” album became a multi-format seller reaching #4 on the Jazz chart, #20 on the R&B chart and #26 on Billboard’s Top 200.

“Rit” also scored a Top 15 hit with “Is It You?,” a single on Billboard’s Hot 100 that showcased Ritenour’s slick sound. Co-written by Ritenour with Tagg and Champlin, “Is It You?” is a smooth, EWF-inspired jam that also climbed to #27 on the R&B chart. Produced by Mason and Ritenour, “Is It You?” sports a beautiful melody and a memorable refrain with killer performances by its three co-writers, Foster and the late Richard Tee on keyboards plus Jerry Hey sweet punctuation with the trumpet.

Listening to the ear-candy melody and top notch atmospheres of “Is It You?,” we long for the days when real music like this was in rotation on radios and could surge to the top of the music charts. Unfortunately, those days are long gone, yet you can still rediscover gems of this caliber and share their beauty with new generations. 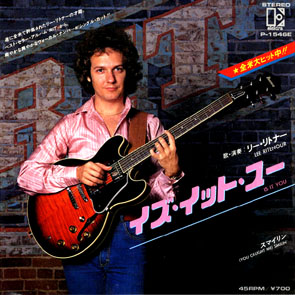 Someone’s just outside, knocking at my door
A stranger, somebody unknown
Someone’s in my dreams, can’t get it off my mind yeah
I’m tired of being alone
Someone’s trying to find an easy way inside
Come on, I’m right here at home, right at home

Who’s that deep inside me, sneaking around my heart?
Are you somebody in love?
Show me what you’re doing and tell me who you are
Hey! I’m ready for love, for love.

If it’s you, come out in the open
You don’t need to hide your love
If it’s you, you know I’m hoping
‘Cause it’s way too late to run away
Don’t run away from love, my love
Is it you?