MY HEART WAS HOME AGAIN

from WITH YOU
written by Marc Jordan & Stephen Moccio

The beginning of 2007 saw the release of a special Valentine’s Day project by international recording star Josh Groban. This eight track compilation CD was titled “With You” and was sold exclusively at the Hallmark store chain. “With You” included previously released material personally selected by the baritone superstar like “You’re Still You,” “Broken Vow,” “When You Say You Love Me” and “Per Te.” This romantic tour-de-force also presented a couple of beautiful, unreleased songs – the title track and “My Heart Was Home Again.”

The first tune is a tender, orchestral ballad co-written by Groban with Walter Afanasieff who also produced it. “My Heart Was Home Again” was co-written by Marc Jordan with Stephen Moccio. David Foster and Humberto Gatica were responsible for the top notch production while Foster and Jeremy Lubbock took care of the intimate, Irish-influenced, instrumental arrangement. “My Heart Was Home Again” features a fantastic vocal performance by the singer backed up by Foster’s acoustic piano. Groban truly owns the song and adds great intensity and power to it. The singer’s flawless work was aided by the magnificent lyrics written by Jordan. “My Heart Was Home Again” is further evidence of the Canadian singer/songwriter’s take-no-prisoners approach to add emotional power to a song and his gift of word. Listening to a song like “My Heart Was Home Again,” we can once again appreciate the perfect musical chemistry and partnership that Foster and Groban cemented year after year and release after release. We hope the future will bring these two gifted music men back together in the studio.

As a final point, here’s what Groban declared about this special project: “The Hallmark CD represents a little bit more of my romantic side. I think there are many, many sides to me, but this CD most definitely represents the more emotional side of me which all guys have, whether they want to admit it or not.” 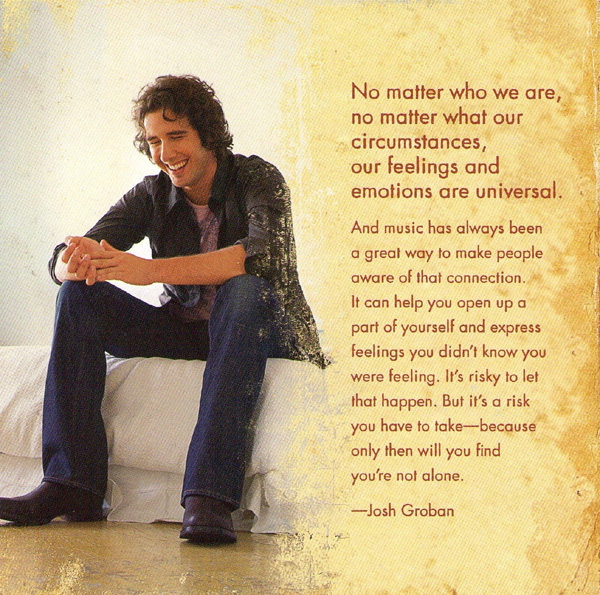 So it goes, history shows
Deserts must expand
And camels sail like wooden ships
Like women on the strand

There’s a bus that leaves at eight fifteen
And another one at ten
Should I climb aboard, risk everything
And ride it to the end

Then I saw your face across the street
And my heart was home again.