from LOVE IN PORTOFINO

After the triumphs of  “Under The Desert Sky,” “Vivere: Live In Tuscany,” “My Christmas” and “One Night In Central Park,” Andrea Bocelli teams up with David Foster again to present a release of his new CD/DVD, “Love In Portofino.” Originally shown in selected theaters around the world on Valentine’s Day, “Love In Portofino” was aired on PBS’ Great Performances in March 2013.

The concert presents material from the Italian tenor’s latest CD, “Passione,” and is performed in the beautiful square of Portofino accompanied by an orchestra and many special guests. Foster, as usual, served as musical director and host for the event. The DVD is a true delight with breathtaking views of Portofino and the spectacular quality of the performances. The only complaints on this release is that the DVD includes half the songs presented in the original PBS special and the CD has just five live tracks with the rest being songs already released on “Passione” or “Amore.” International audiences would have preferred the whole concert, given its amazing quality and the care put in its making.
Bocelli is in great vocal form and his partnership with Foster is always entertaining on stage. Foster’s arrangements are crafted perfectly with smooth rhythms and silky orchestral support. Among the special guests are renowned American violinist Caroline Campbell, trumpet master Chris Botti, Brazilian pop singer Sandy and even Bocelli’s wife, Veronica Berti, for a sweet Italian cover of Frank and Nancy Sinatra’s “Somethin’ Stupid” retitled “Qualche Stupido Ti Amo.” Among the many highlights of this show, we have picked the romantic title track, “Love In Portofino,” as our “song of the week.”
Written in 1959 by singer Fred Buscaglione and lyricist Leo Chiosso, “Love In Portofino” became a big hit in Italy with the smooth rendition of singer/actor Johnny Dorelli. It would eventually became an evergreen, sung and played by artists like Paul Anka, French singer Dalida and Italian jazz pianist Stefano Bollani. Bocelli’s voice gives new life to this old standard as he gently sings the tender lyrics to the audience softly supported by Foster’s magnificent instrumental back-up. A special mention goes to Caroline Campbell’s virtuoso playing that enhances the bittersweet taste of the song. 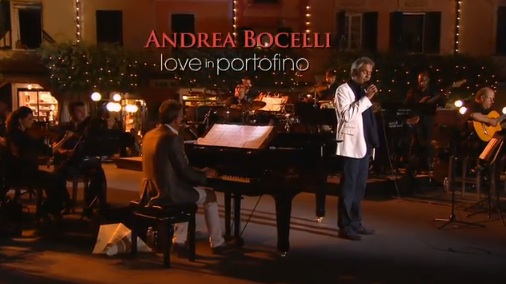