from THE VANISHING RACE

Air Supply is a veteran soft-rock duo from Australia who delivered an important string of hits in the eighties with power ballads including “Lost In Love,” “All Out Of Love,” “The One That You Love,” “Even The Nights Are Better” and “Making Love Out Of Nothing At All.”

Graham Russell was the main songwriting force of the duo while Russell Hitchcock’s tenor voice was its most distinctive feature. In 1984, Air Supply first crossed paths with David Foster. Foster and Graydon co-wrote with Russell and produced the song “I Can Wait Forever” from the platinum-certified soundtrack album for the hit movie “Ghostbusters.” In 1993, the duo released their album “The Vanishing Race” that was produced by Foster’s right hand man and famed engineer, Humberto Gatica. “The Vanishing Race” was another solid endeavor for Air Supply that presented a good set of songs delivered in the group’s classic soft-rock style.
“The Vanishing Race” most famous track is a rendition of Foster’s ballad “Goodbye.” This bittersweet composition has beautiful lyrics written by Linda Thompson and was originally recorded by Foster with the voice of the late Warren Wiebe. Also arranged by Foster, the Air Supply version follows the lines of the original in its intense developing music while showcasing Hitchcock’s voice that soars high in the song’s evocative refrain. Gatica’s production is top notch with great instrumental work by session aces including Dean Parks, Michael Thompson and the late Claude Gaudette. Although “Goodbye” was only a minor hit on the US and UK charts, it became a giant success in Asia where is reached #1 in several countries and helped its parent album to eventually sell over four million copies worldwide. It’s a given fact that “Goodbye,” with its gorgeous melody and lyrics, is one of the best songs co-written by Foster in the nineties. If you would like to take a listen to Wiebe’s version, just click here. 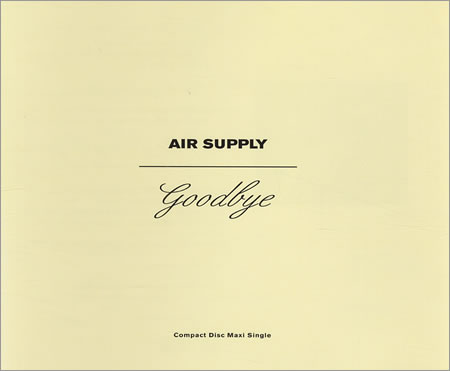