IF LOVE ONLY LASTS FOR ONE NIGHT

from LET’S GO ROUND AGAIN (single)

“Let’s Go Round Again” is one of the most successful singles in Average White Band’s career. Produced in 1980 by David Foster, this dance anthem was a Top Forty R&B hit in the US and went as high as #12 on the UK charts.

Through the years, “Let’s Go Round Again” has become one of the most requested songs at AWB concerts, second only to their giant hit, “Pick Up The Pieces.” The smooth ballad, “If Love Only Lasts For One Night,” was another fantastic Foster production. It can be found on the b-side of Let’s Go Round Again.”

“If Love Only Lasts For One Night” was written and sung by AWB’s main man, Alan Gorrie. It was a gorgeous song that showcases the Scottish funksters’ superior musicianship with the masterful production by the then up’n’coming Canadian music-maker. “If Love Only Lasts For One Night” has a to-die-for instrumental arrangement. Foster based his arrangement on his trademark piano and keyboards, soothing strings and smooth horns to back-up Gorrie’s tender lead vocal. A gorgeous saxophone solo by Roger Ball also went into play while Hamish Stuart’s impeccable vocal harmonies and a tempo change towards the end embellish this refined track.

Both “Let’s Go Round Again” and “If Love Only Lasts For One Night” belong to AWB’s vastly underrated album, “Shine.” Produced by Foster, “Shine” might lacked some of AWB’s rawer funk moments, but it gave the group a top quality pop/soul sound that brought them closer to the best Earth, Wind & Fire and Doobie Brothers sounds of the era. 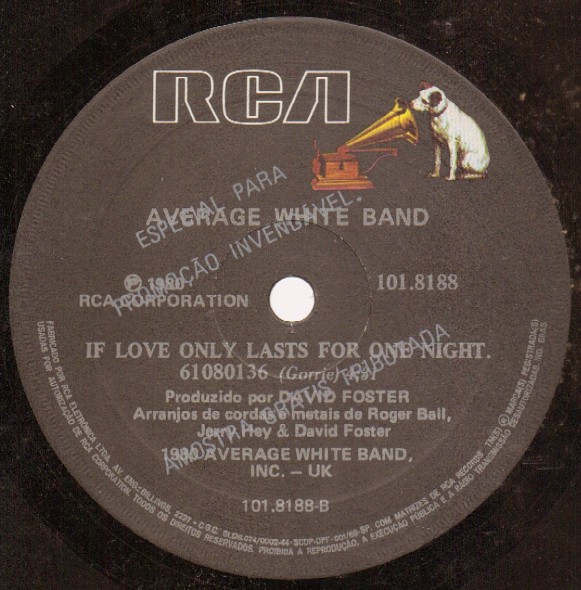 Lyrics
Here we are,
You and I together for the first time
– though heaven knows, I’ve wanted you
And I guess you knew but we just
Never said,
Or never had the chance
And if love only lasts for one night
That would still be all right

Holding you,
Seems like this is what the night
Was made for
– though who can say what lies ahead
Will this flame that flickers in
The darkness
Survive the light of day