from PARADISE/DON’T LET IT MESS YOUR MIND (single)

Ted Neeley is a veteran singer, composer, musician, actor and record producer. He is mostly remembered for his lead performance in the 1973 movie “Jesus Christ Superstar.”

A film adaptation of the Andrew Lloyd Webber/Tim Rice famous rock opera, “Jesus Christ Superstar” was a big hit in the US and the soundtrack went gold. The movie and soundtrack also starred Yvonne Elliman as Mary Magdalene and the late Carl Anderson as Judas.

After this great exposure, Neeley released his first solo album a year later entitled “1974 A.D.” Although it was a solid pop/rock album arranged by Michael Omartian, commercially the album didn’t go anywhere. In 1975, Neeley released a new single, “Paradise”. Produced by Robert Appere, “Paradise” was a catchy number co-written by John Townsend and Ed Sanford, who later became the popular rock/soul group Sanford-Townsend Band. The guitar-driven song is extremely radio-friendly and has strong echoes of The Doobie Brothers’ sound of the Tom Johnston era. Neeley’s voice even resembled Johnston’s rock style. Appere, who was also Neil Sedaka’s producer, enlisted a young David Foster to play on the song. You can hear Foster’s keyboards on the track. Other session aces on that song were Dean Parks and Ritchie Zito on guitars, Jim Horn on sax and Nigel Olsson and Dee Murray of Elton John’s famous rhythm section. Brian and Brenda Russell provided the backing vocals. “Paradise” made #110 on the Bubbling otUnder Hot 100 chart. Sedaka also co-wrote the single’s b-side, “Don’t Let It Mess Your Mind” with Phil Cody.

Neeley kept working in the music biz and appeared on albums by Tina Turner, Meat Loaf and Keith Carradine. He composed music for movies and starred as an actor on both Broadway and the big screen. Recently, Neeley made an appearance in Quentin Tarantino’s hit movie “Django Unchained.” 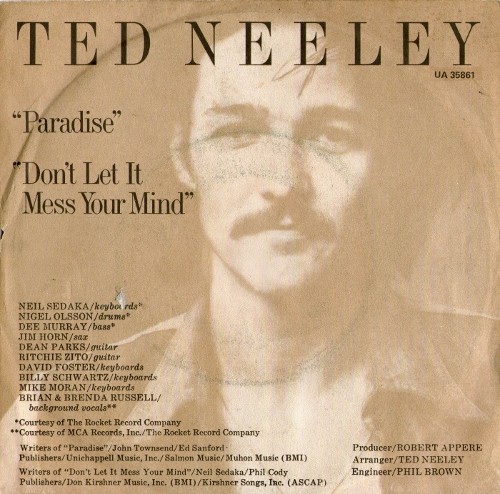