WE CAN STOP THE HURTIN’

from ALONG COMES A WOMAN (single)

David Foster’s triumphant collaboration with Chicago in the eighties is mostly remembered for timeless ballads like “Hard To Say I’m Sorry,” “You’re The Inspiration” and “Hard Habit To Break.” Surely, those songs shaped up the adult contemporary sound of that era but those three Chicago albums also included lesser-known, up-tempo tracks that were absolute ear candies.

A couple of those goodies, “Along Comes A Woman” and “We Can Stop The Hurtin’” were included in the fourth single from the seven-times platinum seller, “Chicago 17.” Released in February 1985, the bouncy, rock/dance “Along Comes A Woman,” co-written by Peter Cetera with Mark Goldenberg, was another hit for the band reaching #14 on Billboard’s Hot 100, #10 Mainstream Rock and #25 Adult Contemporary. “Along Comes A Woman” is a catchy number that showcases Cetera’s powerful tenor as well as the band’s legendary horns and vocal harmonies plus Foster’s trademark, multi-layered keyboards. The single b-side, “We Can Stop The Hurtin’” is a true pop/r&b gem. This track, co-written by Robert Lamm and Bill Champlin with Deborah Neal, sports such a fantastic funky groove and the guys did such a great job with the vocal harmonies helped by special guests Donny Osmond and Richard Marx. The keyboard-driven arrangement is terrific and the horns are slamming making it an absolute a joy to listen to. “Chicago 17” may sound a little dated today but it is chock-full of pop masterpieces and it is, without any doubt, one of the absolute pinnacles of both Foster’s and Chicago’s careers. 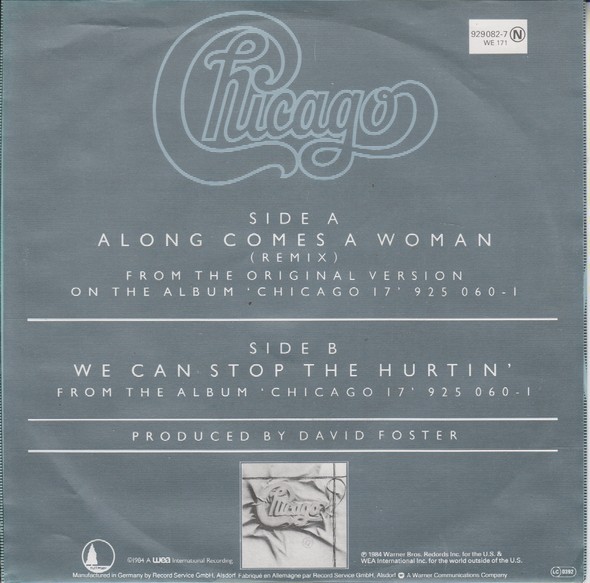 Families livin’ in their cars and kids run numbers out of bars
Knowing pride won’t pay the bills, men work jobs beneath their skills
Hadn’t we better hand out more than just a line
Shouldn’t we try to find solutions with our minds
Haven’t you had it knowing nothing’s getting solved
Maybe we’d better, better get involved