HELP IS ON THE WAY

from FOR YOU, FOR LOVE/HELP IS ON THE WAY (single)

David Foster often mentioned that he wasn’t satisfied by the Average White Band’s album “Shine” that he produced in 1980. In his recent memoir, “Hitman: Forty Years Making Music, Topping Charts & Winning Grammys” the music-maker even recollected a meeting he had with Quincy Jones when they were listening to the album while Foster was making up excuses to justify what he felt were some faults of the recording.

We must be deaf cause  we’ve been listening to “Shine” since its release, thirty-two years ago, and we still think it’s one of Foster’s best productions ever.The songwriting is solid with pieces like the dancefloor classic, “Let’s Go ‘Round Again” that’s become one of AWB’s most loved hits and “Whatcha Gonna Do For Me,” a tune that Chaka Khan made a classic just a few years later. There’s a bit for everyone on “Shine,” funky numbers with just a light disco approach, gorgeous ballads and breezy mid-tempos. The arrangements are catchy and elegant with an overall, irresistible jazzy mood. Foster co-wrote two songs on “Shine.” The first is a funky/disco jam entitled “Catch Me (Before I Have To Testify)” while the other is a fantastic mid-tempo entitled “Help Is On The Way.” This track is absolutely delicious with Foster’s thumbprint all over. Hamish Stuart’s golden voice and AWB’s tight musicianship are on the spotlight with Foster’s guest keyboards and terrific strings and horns to add a lush feel. “Help Is On The Way” was the b-side to another masterpice of the album, the pop/soul ballad “For You, For Love.” One thing is for sure, “Shine” has aged wonderfully and its pop/soul appeal is intact or even enchanced today, especially compared to what’s on radio nowadays. This is music that was made by real, immensely talented musicians and we’ll never get tired to listen to it. 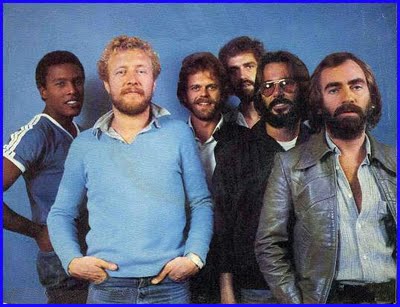 Seems to me that you’ve been stranded
far too long
watchin’ the sands of time
trickle away,
Won’t you talk to me,
Tell me what’s eatin’ at ‘cha
Even if you don’t know what to say
You know that the time is right
To turn this thing around –
it’s getting closer to you
Don’t give up because pain is all
you’ve found

You and me, walking down easy
streets together
Is a dream I cannot see slippin’ away
Why don’t you get to me
Over this distance you’ve created
And I’ll put you in – set you free
You know the time is right
To turn this thing around –
you’re getting closer to me
Don’t give up because pain is all
you’ve found