LIVING FOR THE MOMENT

from RIVER OF LOVE (single)

In 1990, David Foster published an interesting solo album entitled “River Of Love.” It was a collection of songs mostly co-written by Foster with the help of various other top songwriters and the support of a stellar line-up of singers and musicians.
The catchy title track is a pop/rock goodie that sees the blending of guest singers Bryan Adams, Warren Wiebe and former Average White Band member, Hamish Stuart. “River Of Love” was also released as a single backed-up by two other new compositions, “Living For The Moment” and “Is There A Chance.”

“Living For The Moment,” composed by Foster with his then-wife, Linda Thompson and the great Jorge Calandrelli, is an absolute masterpiece with a refined latin vibe and magnificent vocal and instrumental execution. Again, Warren Wiebe is in the spotlight delivering a show-stopping performance while Foster shines with his piano and synths on the delicate instrumental intro that develops into an elegant jam supported by the all-star backing band. The other song included on the single, “Is There A Chance,” is a collaboration with the legendary Brian Wilson and it shows an obvious Beach Boys’ influence especially on the rich vocal harmonies sung by Wiebe with the help of Timothy B. Schmit of The Eagles. These three beautiful songs and their parent album, “River Of Love,” are bright gems of Foster’s immense catalogue that we suggest to rediscover to appreciate his unique pop sensibility and amazing talent. 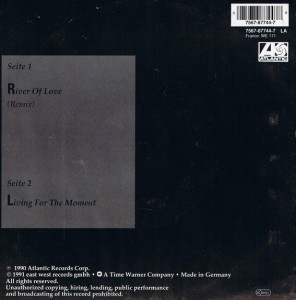 On the edge of the light
We are blinded by our own short sight
Nothing is beyond us,
We can make a difference to the quality of life

And with each passing day,
Time become smore real in every way.
Future generations,left here with their nations,
Though they never had a say.

Just push replay…
Edit our mistakes of yesterday
I don’t think we’ll ever get that far.

Chorus:
Livin’ for the moment,
Makes you feel like dancin’
Wouldn’t you like to have some moonlight
To add to the romancin’?
How can you keep lyin’?
Atmosphere is dyin’,
I can no longer hear the music,
I think the party is over.

And if we could only learn,
We can’ cross our bridges once they’ve been burned
Please help me make a difference.
Find a cause that you can stand behind
And give your heart

Look forward to a better world because of me and you
Striving for our children’s children too.