from DREAM WITH ME

Jackie Evancho is an American child singer who recently climbed to fame thanks to her amazing talent and the expert guidance of David Foster.

Evancho released her second album, “Dream With Me,” produced by Foster, in the spring of 2011 when she just turned eleven years old.

Her style is classical crossover not too far from other singers like Charlotte Church and Josh Groban. What’s absolutely impressive, given her young age, is Evancho’s incredible voice and her superior skills. Foster’s mentoring has been instrumental to give her the right material to sing, the chance to maximise her always developing talents and great exposure to various media. “Dream With Me” was an out of the box hit debuting on #2 on Billboard’s top 200 album chart and reaching #1 on the magazine’s classical chart while in the UK it went to #4. The album features a pout pourri of operatic material, pop songs with some Broadway and movie themes. Jackie also had the chance to duet with Barbra Streisand on a rendition of West Side Story’s “Somewhere,” originally recorded by the superstar in 1985 always with Foster in the recording booth. Another special pairing on “Dream With Me” was with UK singing phenomenon, Susan Boyle on Foster’s co-penned, “ “A Mother’s Prayer.” Evancho shines on opera themes like Puccini’s “O Mio Babbino Caro ” and “Nessun Dorma” but also on classics like “When You Wish Upon A Star” and Ennio Morricone’s “Nella Fantasia.” She also handles perfectly pop material like Walter Afanasieff and Lara Fabian’s “Imaginer” and especially Sarah McLachlan’s bittersweet masterpiece, “Angel.” The gospel-tinged rendition of the song also sports an outstanding arrangement by Foster. The production on the album is flawless and Foster’s work is absolutely what was needed to put Jackie Evancho’s in the spotlight. She clearly has a bright future ahead of her. 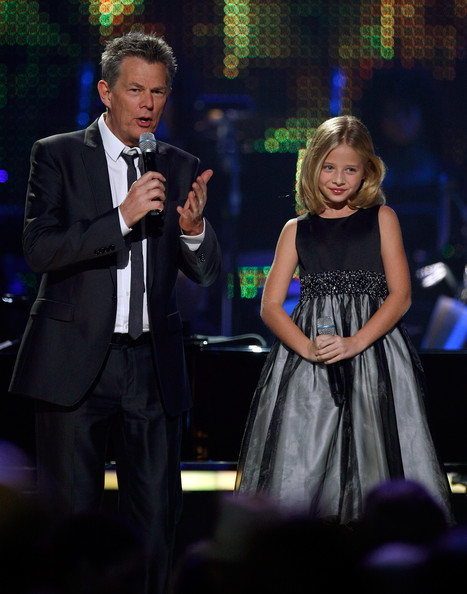