IF WE WANT TO

from SWEET SUMMER MUSIC/IF WE WANT TO (single)

In 1976, David Foster’s pop/rock quartet, Attitudes, went back into the studio to work on their sophomore album eventually entitled, “Good News.” Again, their new record was released on George Harrison’s label, Dark Horse Records with special guests like Ringo Starr, Booker T. Jones, Jay Graydon and the Tower Of Power horns. “Good News” was another effective mix of pop, soul and rock that was of particular interest for the stellar instrumental performances by the band members Foster, Jim Keltner, Paul Stallworth and Danny Kortchmar.

The first single off the album was a catchy pop/soul number entitled “Sweet Summer Music” that offered a breezy, latin feel with smooth vocals and harmonica that was close to the atmospheres of War, a successful funk band in the seventies. “Sweet Summer Music” was a minor entry on Billboard’s Hot 100 at #94. The single’s b-side, “If We Want To,” could be extremely interesting for David Foster fans cause it’s a track that comes from the sessions of Attitudes 1975 self-titled debut album but didn’t make the final cut.
“If We Want To,” co-written by the group’s four members, is a delicious funky jam with brazilian overtones and fantastic breaks and changes. Attitudes’ musicianship is on the spotlight with great performances by Foster and Kortchmar supported by the tight and powerful rhythm section. With its intricate rhythms and jazzy atmosphere, “If We Want To” could be part of any serious “rare groove” compilation. 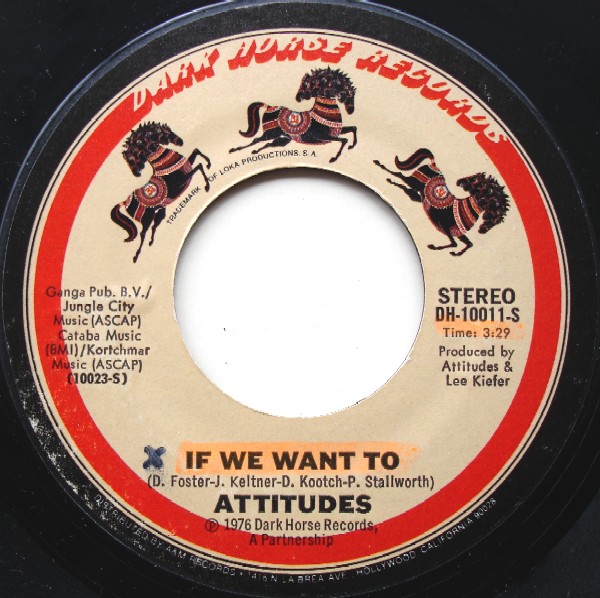