from THE JOHN DUNBAR THEME/DANCES WITH WOLVES (single)

The late John Barry was the genius behind some of the best music ever writer for movies.
His unforgettable work on many James Bond’s blockbusters like “Goldfinger” and “A View To A Kill”, the multitude of soundtracks for hit movies like “Midnight Cowboy,” “Out Of Africa,” “The Cotton Club” and “The Lion In Winter” place him among the most successful film composers in history.

Barry was also responsible for the unforgettable theme of the seventies TV series, “The Persuaders!,” starring Tony Curtis and Roger Moore.
One of the highlights of Barry’s career was the soundtrack of Kevin Costner’s  1990 masterpiece, “Dances With Wolves.” Barry won one of his five Academy Awards for his work on that movie. The composer, given the amazing success of “Dances With Wolves,” decided to record a couple of special tracks that presented reworked versions of some of the themes included in the soundtrack. On that occasion, Barry called David Foster and asked him get a more pop-oriented sound. Foster co-produced the new tracks with Barry and gave them the radio-friendly spin requested while Humberto Gatica mixed the final result.
Those two tracks, “The John Dunbar Theme” and “Dances With Wolves” were released on a promotional cd-single.
In 1995, both songs were eventually included in the re-release of the soundtrack as bonus tracks. 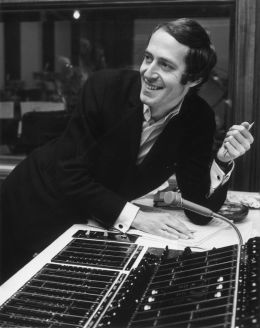