from LOVE ME TOMORROW/BAD ADVICE (single)

This week we go back to a classic David Foster/Chicago collaboration. In 1982 after “Hard To Say I’m Sorry” became a smash, worldwide hit, Chicago kept the comeback going with another beautiful Foster/Peter Cetera ballad, “Love Me Tomorrow.” That song was perfect stuff for Top 40/Adult Contemporary radios with Cetera’s crystal clear tenor again in the spotlight under Foster’s brilliant guidance.
“Love Me Tomorrow” reached #22 on Billboard’s Hot 100 and #8 on the Adult Contemporary chart giving Chicago another hit. If “Love Me Tomorrow” was an example of Chicago’s and Foster’s artistry to craft a love song, the single’s b-side, “Bad Advice,” was a reminder to the listener that Chicago was still a giant Rock/Jazz combo. “Bad Advice,” co-written by Foster and Cetera with trombone player and arranger extraordinaire James “Jimmy” Pankow, presented a terrific intro with the horn section up front soon joined by Bill Champlin’s powerful yet soulful vocals. There are echoes of Toto and Airplay quality pop throughout the song with rhythm changes and an ear candy refrain sung by Cetera. The song’s bridge belonged to Foster’s keyboards while the finale put the horns in the spotlight again. “Bad Advice” was one of those energetic, up-tempo album tracks that Foster produced for Chicago and that too often go unnoticed when analyzing his work with the band. 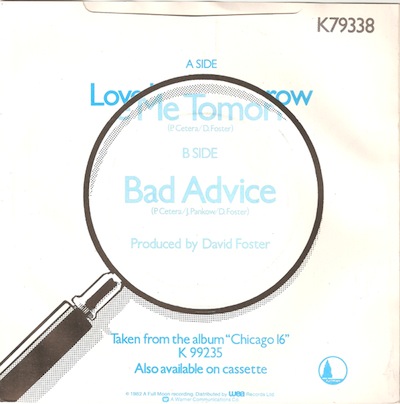 She said, tell me what it’s all about. I said why, why, why?
It’s just something you could do without. you better try, try try.
She said, I can’t reach you on the telephone.
I can’t call you when you’re not at home.
You keep saying that you’re all alone.
That’s a lie, lie, lie.

Chorus:
Bad advice had me down and undone. got to try again to believe in myself.
Look at me, I’m alone in the end. can you see me falling, falling down.

I said, mama can you get it straight? she said why, why, why?
-i wanna tell you that it just can’t wait, so let’s try, try, try
She said, I don’t care where you might have gone.
I don’t care ’cause you’ve done me wrong.
You been doin’ it far too long,
So goodbye, bye, bye.

Chorus:
She said tell me what it’s all about. I said, why, why, why?
It’s just something you can do without. you better try, try, try.
-i can’t reach you on the telephone. I can’t call you when you’re not at home
You keep saying that you’re all alone. that’s a lie, lie, lie