From TELL HIM (single)

“Tell Him” was the first collaboration between superstars Barbra Streisand and Céliné Dion. Dion always mentioned Streisand as her most significant singing influence and Streisand often praised Dion’s amazing voice.

The associations between the two songbirds were their common label, Sony Music, and David Foster. The Canadian studio wizard who launched Céliné’s international career and produced a multitude of Barbra’s projects was asked to create a special song for the duet. Foster co-wrote the music with fellow super-producer Walter Afanasieff while his former wife, Linda Thompson, wrote the lyrics. “Tell Him” was musically and lyrically tailor made for the two phenomenal singers. It’s a lot more than a big ballad sporting a beautiful orchestration and unique crescendo enhancing the two voices’ spectacular interplay. Released in November 1997 as the first single off Dion’s “Let’s
Talk About Love” and Streisand’s “Higher Ground,” “Tell Him” became a massive hit worldwide selling well over a million copies. The song reached the Top 5 on the Adult Contemporary Chart. However, given the single wasn’t released in stores, it didn’t crossover to the Pop charts. “Tell Him” was also nominated for a 1998 Grammy as “Best Pop Collaboration with Vocals.” 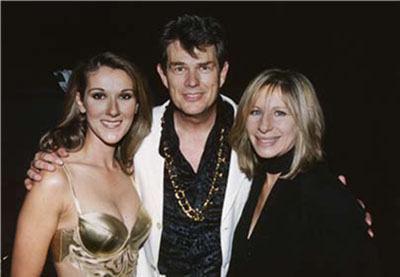