Guitarist Al McKay is a founding member of Earth, Wind & Fire. His trademark rhythm guitar can be heard on the band’s most famous hits like “That’s The Way Of The World,” “Can’t Hide Love,” “Getaway,” and “Boogie Wonderland.” He and Maurice White also co-wrote some unforgettable stuff for the band like “Sing A Song,” “Let Me Talk,” “September” plus “Best Of My Love” for The Emotions.

During his tenure with EWF, McKay built a parallel career as a session player working on albums by Patrice Rushen, Harvey Mason, Eumir Deodato, Herbie Hancock, Valerie Carter, Flora Purim and many others. In 1981, McKay left the R&B super group and started a career as songwriter/producer while continuing to do some session work. He produced albums for the legendary Temptations, A Taste Of Honey, Shirley Jones of The Jones Girls, Finis Henderson and Glenn Jones.

In the nineties, McKay formed his own combo, The Al McKay Allstars, which at various stages included several former EWF members. The Al McKay Allstars performs a live show based on EWF’s greatest hits. The band has toured worldwide several times always with good success. In 2001, The Al McKay Allstars released a studio album entitled “Al Dente” that presented renditions of six EWF classics including “September,” “Fantasy” and “Sing A Song,” plus five new songs co-written by McKay. The covered material was arranged with a modern twist and performed with good conviction and fire. One of the highlights of “Al Dente” was “You Owe It All To Love” that was originally sung by Finis Henderson on his fantastic 1983 album “Finis.” In 2006 the group released a live album, “The Earth, Wind & Fire Experience – Live In Europe.” It’s pretty obvious that it isn’t the original EWF on stage and sure the lead singers aren’t Maurice White or Philip Bailey, but the high level of musicianship and the fantastic songs covered make for a very pleasant listen. Among the legendary tunes included are three masterpieces co-written by David Foster. They are the milestone ballad “After The Love Has Gone,” “In The Stone” with its classic intro and catchy progression and the funky jam of “Let Your Feeling Show.” 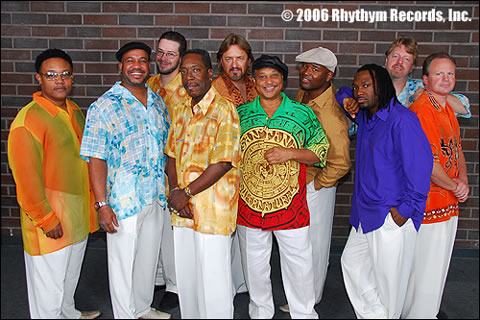 Woke up Sunday morning,
Feeling out of tune.
Wrapped my eyes around you,
Love came in the room.
Baby, gonna let my feelings show,
Everyday, gonna learn to love you more.

Laughing into midnight,
Lover being my guide.
We approach the morning,
Feeling good inside.
Baby, gonna let my feelings show,
Everyday, gonna learn to love you more.

Paying dues and changes,
Living day to day.
Love is necessary,
To help you find the way.
Baby, gonna let my feelings show,
Everyday, gonna learn to love you more.

Fairy tales and stories,
That we fail to see.
We will tell the story,
Of reality.
Baby, gonna let my feelings show,
Everyday, gonna learn to love you more.

Tingle in our heartbeat,
Rapture on the cloud.
When softer words are spoken,
Action speaks out loud.
Baby, gonna let my feelings show,
Everyday, gonna learn to love you more.