JUST FOR THE MOMENT

From JUST FOR THE MOMENT/ISN’T IT TIME? (single)
Written by Ray Kennedy & Jack Conrad

Ray Kennedy is a veteran pop/rock singer/songwriter best known for his tenure with the super group KGB together with legendary guitarist Mike Bloomfield, keyboardist Barry Goldberg and drummer Carmine Appice. In the Seventies, Kennedy collaborated with many rock icons including Jeff Beck and Dave Mason with whom he wrote several songs. One such song was “Sail On Sailor,” co-written with Brian Wilson that became a big hit for the Beach Boys.
At the end of the Seventies, Kennedy signed a deal with Maurice White’s ARC label and started working on an album with David Foster as the producer and arranger. “Ray Kennedy” was released in 1980 and was a great example of the best FM pop/rock sound of those days. Foster’s pristine production and elegant arrangements placed the record in the same refined league of Toto and Boz Scaggs. Several Toto members appear on the album with Steve Lukather’s guitar in the spotlight. Kennedy has a pleasant, bluesy voice that served the material well. The songs were mostly written by the singer with Jack Conrad, although a couple of the best moments were co-written with Foster. The album presented a well-balanced mix of ballads and up-tempo rockers and included a fine cover of “Sail On Sailor.”

The first single from the album was the ballad “Just For The Moment” that’s an absolute pleasure for Foster aficionados. It featured the most loved elements of the
“Foster Sound;” a smooth atmosphere, irresistible melody plus delicate keyboard and synth playing. “Just For The Moment” reached #82 on Billboard’s Hot 100. The single’s b side was a powerful rocker entitled “Isn’t It Time?” that’s again fueled by superior guitars and keyboards underscoring Kennedy’s effective vocal performance. 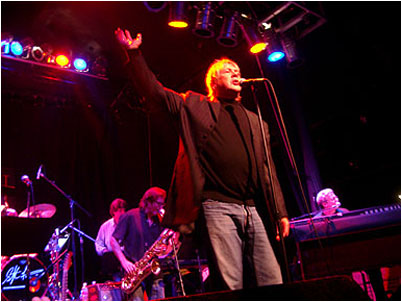