From SONGS WITHOUT WORDS
Written by David Foster

Through the years David Foster has written various instrumentals that have become real classics. In 1985, the sweet melody of “Love Theme From St. Elmo’s Fire” gave Foster a top 20 hit as a recording artist. “Winter Games,” the intense theme of the Calgary Winter Olympics, followed, in 1988, giving the super-producer another entry on Billboard’s Hot 100.In the nineties, another famous instrumental was the amazing rendition of the holiday classic, “Carol Of The Bells” that was featured in the famous Barbra Streisand movie, “The Mirror Has Two Faces” as well as on Foster’s own “Christmas Album.” There’s another track that deserves a mention, the haunting and magical “Water Fountain.” This evocative instrumental was originally recorded by Foster, in 1987, for the soundtrack of the movie, “The Secret Of My Success.” This first version was based on various keyboards and synthesizers. One year later, when Foster released his classical inspired project, “The Symphony Sessions,” he remade the tune on piano backed up by a full orchestra. Finally, in 1997, new age label, Windham Hill released a special record, “Songs Without Words,” that featured piano solo performances by many famous music makers. Foster was among those appearing on the album and he presented a fantastic piano solo version of “Water Fountain.” It is an absolute pleasure to be caressed by Foster’s piano performance and a treat to witness how he reworks his own classic. Among the other artists on “Songs Without Words” are Desmond Child, Walter Afanasieff, Brian Wilson, Carole King, Stephen Sondheim and Jeremy Lubbock who paints a gorgeous version of “Not Like This,” a gorgeous song he originally wrote for Al Jarreau. 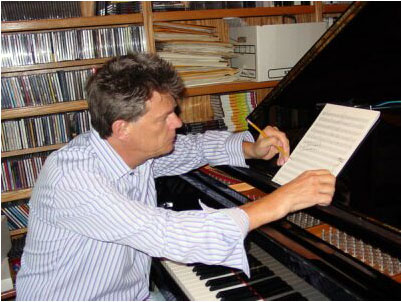