“It’s Time” is Canadian Michael Bublè’s follow-up to his mega-successful, self-titled debut album. Released in 2005, “It’s Time” kept building the singer’s popularity worldwide and solidified him as a major star in the United States. The record reached the top of the charts in several countries while debuting at #7 on Billboard’s Top 200. It was also certified double platinum in the States, five times platinum in Australia and six times platinum in Canada.

David Foster and Humberto Gatica were again at the helm of the project and produced all but one track of “It’s Time.” The material picked was another winning combination of standards from different eras, all beautifully performed by Bublè with top notch arrangements by Foster. Throughout the album, Bublè’s velvety voice caresses the listener with superior class and style taking full advantage of Foster’s multifaceted musical scenario and pristine production. The up-tempos are split between R&B classics like “How Sweet It Is,” an incredible big-band reworking of The Beatles’ “Can’t Buy Me Love” and a Latin version of “Save The Last Dance For Me.” There are evergreens like a smooth bossa-nova take of “Quando, Quando, Quando” in a duet with pop diva Nelly Furtado and a faithful reading of the Sinatra classic “I’ve Got You Under My Skin.” It’s the ballads, however, that are the core of “It’s Time” with impeccable, intense covers of Leon Russell’s “Song For You,” Stevie Wonder’s “You And I” and Ray Charles’ “You Don’t Know Me.”

The bittersweet ballad “Home” was the only original tune on the album. It marked Bublè’s first co-writing credit along with his musical director Alan Chang and Amy Foster-Gillies. “Home” became a top worldwide single and reached #1 on the Adult Contemporary charts. 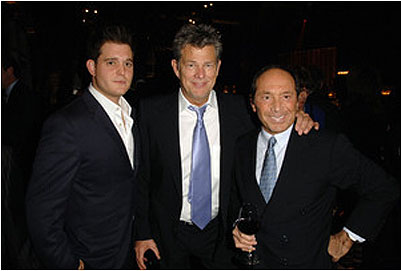 May be surrounded by
A million people I
Still feel all alone
I just wanna go home
Oh, I miss you, you know

And I’ve been keeping all the letters that I wrote to you
Each one a line or two
“I’m fine baby, how are you?”
Well I would send them but I know that it’s just not enough
My words were cold and flat
And you deserve more than that

Another aeroplane
Another sunny place
I’m lucky, I know
But I wanna go home
Mmmm, I’ve got to go home

And I’m surrounded by
A million people I
Still feel all alone
Oh, let me go home
Oh, I miss you, you know