From ON SOLID GROUND
Written by Larry Carlton

“This album was almost killed by a gunshot, but it was saved by God, prayers, friends, doctors, therapists, more prayers and months of healing…” Legendary guitarist Larry Carlton used these heartfelt words for the liner notes of his 1989 record, “On Solid Ground.” This album celebrated his return to life and music after receiving a nearly fatal gunshot wound in the throat outside his L.A. studio. Carlton wrote eight new songs for the project plus recorded covers of Eric Clapton’s “Layla” and Steely Dan’s “Josie” that opens the album. Carlton played on Steely Dan’s original version and this funky rendition reassured his fans that his amazing talent was still there. He absolutely shines on all the songs, playing his electric guitar with his often copied but never equaled class and style. “On Solid Ground” belongs on the more sophisticated side of contemporary jazz with its laid back, refined atmosphere. The line-up of musicians on the album is impressive with pros like John Robinson, Abe Laboriel, Dean Parks, John Pena, Alan Pasqua, and David Foster who makes a rare guest appearance on the title track. This song is a beautiful ballad that echoes the best pop instrumental works that Foster mined with success in the eighties. His superior work on the keyboards and synthesizers add much needed color and weight to the song that’s dominated by Carlton’s intense guitar playing. Kirk Whalum plays some effective sax lines that remind the listener of Dave Boruff’s classic performances on various Foster productions. “On Solid Ground” was nominated for a Grammy and started another successful phase of Carlton’s career that brought many more great albums and sold-out concerts all over the world. In 1997 he joined the all-star fusion group, Fourplay, which led him to more triumphs on the jazz charts. 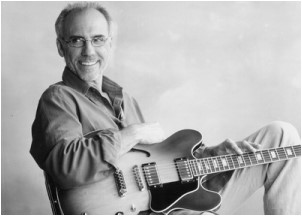