This brilliant duet, sung by superstars Nicole Kidman and Ewan McGregor, was recorded for the “Moulin Rouge” soundtrack. The movie, directed by Baz Luhrmann, was a very successful modern-day musical. Kidman and McGregor demonstrated surprisingly good singing talent. They perform this first-rate song, written by David Baerwald, really well. “Come What May” was actually composed by Baerwald for Luhrmann’s previous movie, “Romeo + Juliet”. Because of this, the song was absurdly disqualified for an Academy Award nomination even though it brought its writer a Golden Globe nomination. The song is an evocative ballad produced by David Foster who backs the singers with a huge orchestral sound that set the romantic atmosphere and wonderfully supports Kidman and McGregor’s intense performances. Foster applies the same winning musical recipe that brought his protégée Josh Groban to international stardom.
The 2001 “Moulin Rouge” soundtrack was quickly certified platinum. It includes a blend of Broadway-like songs, usually sung by Kidman and McGregor, with some modern material performed by a who’s who of hip music stars including Beck, Bono, David Bowie and Fatboy Slim. It also contains the ultra-successful #1 remake of Labelle’s “Lady Marmalade” sung by Christina Aguilera, Mya, Pink and Lil’ Kim. 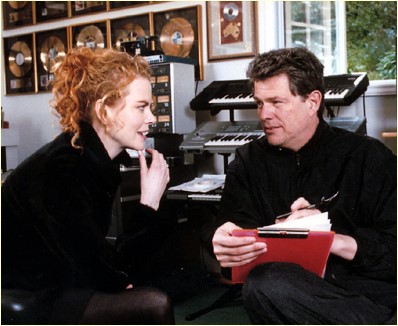 Never knew I could feel like this
Like I’ve never seen the sky before
I want to vanish inside your kiss
Every day I’m loving you more than this
Listen to my heart, can you hear it sings
Telling me to give you everything
Seasons may change, winter to spring
But I love you until the end of time