GONNA GET IT NEXT TIME

“Gonna Get It Next Time” is one of several Tubes/David Foster collaborations that were released as b-sides of the group’s early eighties hit singles. A few good songs like “When You’re Ready To Come,” “Keyboard Kids” and “Sports Fans” have finally seen the light of day recently on different greatest hits compilations. “Gonna Get It Next Time” is still unavailable on compact disc and can only be found on the rare “Sports Fans” single. Co-written by soundtrack composer Dominic Frontiere with lyricist Adrienne Anderson of Barry Manilow fame, the song was included in a very forgettable 1981 Chevy Chase movie entitled “Modern Problems.” This track proves again that Foster is one hell of a rock producer when given the right material and the right band. The song is driven by one rock guitar with a strong vocal performance by lead singer Fee Waybill who receives some strong support by Bobby Kimball of Toto on backing vocals. Other key factors are Foster’s distinctive work on the keyboards plus a powerful guitar solo probably played by another member of Toto, Steve Lukather. Together with a few, great fellow fans (you know who you are) we’re always on the hunt for other rare Foster stuff to use on future reviews, so keep reading! 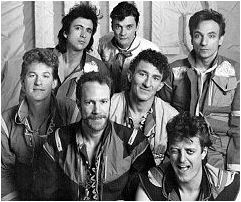