IF YOU COULD SEE YOU (THROUGH MY EYES)

from FROM THE SOUL OF A MAN
Written by Diane Warren 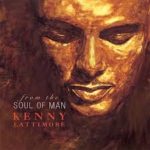 Kenny Lattimore is a talented American r&b singer. He started his recording career in the second half of the nineties with a string of albums and singles that built him a solid reputation among international soul music audiences. Among his hit r&b songs were the Grammy-nominated top three hit, “For You” and top twenty hit, “Never Too Busy.”