Faith Evans is a talented r&b singer/songwriter who was a prominent figure in the Sean “Puff Daddy” Combs’ circle of the nineties. Ms. Evans released three platinum albums between 1995 and 2001 for Combs’ Bad Boy Records. The second of those successful releases was Keep The Faith. Released in 1998, this cd went all the way to #6 on Billboard’s Top 200 and #3 on the Top R&B/Hip-Hop Album charts. Supervised by Combs and mostly co-written by Evans, Keep The Faith included a string of dance floor hits along with a beautiful ballad entitled “Lately I.”

“Lately I” was co-written by the legendary Diane Warren and noted R&B music-maker, Stevie J. plus co-produced by The Hitman, David Foster. Foster was red-hot at the end of the nineties because of his massive hits for Whitney Houston, Celine Dion and many others, so he was the right choice to enhance the hit potential of “Lately I.” Oddly enough, Foster only produced Ms. Evans’ vocals for the song while the instrumental part was handled by co-writer Stevie J. Ms. Warren’s lyrics were touching and bittersweet and the singer, under Foster’s masterful guidance, gives a superb performance. Ms. Evans demonstrated great vocal ability and her heartfelt vocals are both aching and beautiful. Musically, the song is catchy like every Diane Warren ballad. Warren ‘s songs convey power and intensity yet the instrumental production was a tad lacking. The instrumentals do not have the lush grandeur of Foster’s previous trademark production gems for Ms. Warren including Celine Dion’s“Because You Loved Me” and Toni Braxton’s “Un-Break My Heart.” In November 1999, “Lately I” was the final single released from Keep The Faith. Though a whole year had passed since the parent cd was released, “Lately I” only became a minor hit on the R&B Singles chart at #78. 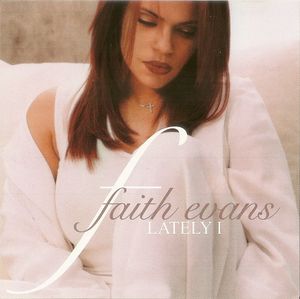 Lately I don’t wanna hear my favorite song
Lately I, I’m finding it hard to carry on
Lately everything I see is painted blue, oh
Baby I’ve been dyin’
Baby I’ve been missing you, oh

Lately I don’t know why I ever let you go
But I want you back
I need you back
Without you it’s all wrong
Baby, make it right
Bring your love back to my life
Cuz nothing’s been the same since you’ve been gone

Oh baby
I want you back
I need you back
Without you it’s all wrong
Baby, make it right
Bring your sweet love back to my life
Cuz I’m just not the same since you’ve been gone, oh whoa