THAT’S THE WAY TO GO

from THAT’S THE WAY TO GO (single)

The Bottom Line’s “Crazy Dancin'” was one of the first disco albums developed in the United States around the mid-seventies. This project was the brainchild of well-known musician/songwriter Jack Conrad. He decided to bring to America the disco sounds that were so hot in Europe around those days. Conrad was renowned for writing and playing on albums for Three Dog Night, The Babys, Paul Williams, Kiki Dee and The Doors.

The sessions for “Crazy Dancin'” took place in 1974 LA with a line-up of young and gifted musicians including Conrad playing bass, David Foster twiddling on keyboards, Jay Graydon strumming guitar, Steve Forman thumping on percussion, Mike Baird beating the drums, Chuck Findley playing the trumpet and writing the horn arrangements, Jim Horn and Gary Herbig blowing the saxophones, Chas Higgens singing lead vocals and Ray Kennedy, Mentor Williams , Lee McElfresch “and anyone else foolish enough to be nearby the studio when voices were needed” on backing vocals. Other contributors included Bobby Findley, Dalton Smith, Slyde Hyde and Gary Grant. Foster and Graydon played a prominent role on the album by co-writing songs with Conrad and providing ideas for the elegant arrangements. The Bottom Line first released their sound in Europe that same year and was brought to the US and Japan in 1976 by Greedy Records.

The first single off the album was a collaboration between Foster, Graydon and Conrad entitled “That’s The Way To Go.” This song was a catchy dance anthem that sported an extremely sophisticated instrumental part that wasn’t easy to find on your typical disco tracks. Graydon’s trademark guitar with its gorgeous, melodic sound was the spotlight on this song. The track was backed up by a tight rhythm section and some powerful horns beautifully arranged by Findley. Higgens provided the soulful vocals to the song’s ear-candy refrain. “That’s The Way To Go” was the first 12 inch single ever released in the US. It became a minor hit on Billboard’s R&B chart at #85. This song and the whole “Crazy Dancin'” record showcased the amazing musicianship of Foster and Graydon at such an early stage of their careers. Their playing was already top-notch and beefed up the material with jazzy licks and superior performances.

[audio:https://www.fozfan.com/wp-content/uploads/2015/01/That_S_The_Way_To_Go_The_Bottom_Line.mp3|titles=That s The Way To Go The Bottom Line|artists=Chas Higgens] 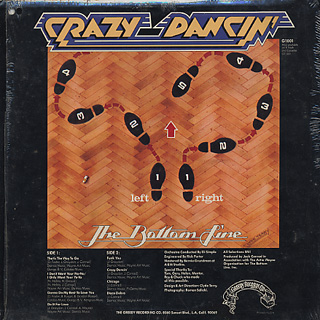