SPIRIT OF A NEW WORLD

from SPIRIT OF A NEW WORLD/TOUCH (single)

Earth, Wind & Fire released “Electric Universe” in 1983. In their attempt to modernize their sound, they drastically changed it. The R&B super-group got rid of their trademark strings and horns with classic funk/soul grooves in favour of heavily programmed music dominated by synthesizers and programmed drums. Probably Maurice White heard the influence of the growing wave in black music: people like Prince, Cameo and Herbie Hancock who were storming the charts with their kind of techno/funk sound. From a productive point of view, the final result isn’t too far from the Al Jarreau album “High Crime” that presented the same programmed atmospheres.

It seemed like the record labels and gifted music makers like White and Jay Graydon were trying to capture a new audience following those new trends. “Electric Universe” still included above par material, yet the new arrangements don’t do EWF justice. The single, “Magnetic,” was written by Martin Page and was another top ten on the R&B chart for the group, yet it was a far cry from EWF’s previous masterpieces. Page, a singer/songwriter from the UK, co-wrote the bulk of “Electric Universe” and was the main creative force behind the album.

David Foster was also on board and co-wrote two of the album’s best moments – the classic ballad “Could It Be Right” and a pretty good funky/pop song entitled “Spirit Of A New World.” This up-tempo number offers the usual top notch harmonies by White and Philip Bailey backed up by a wall of sound made of keyboards, synths, guitars and programmed drums. White’s evocative lead vocal is extremely on target, especially on the verses, while the catchy refrain makes it quite radio friendly. The track also features an effective rocking work on guitar by Roland Bautista and a refined soprano saxophone solo by Andrew Woolfolk. “Spirit Of A New World” was released as a single in Japan backed up by “Touch.” 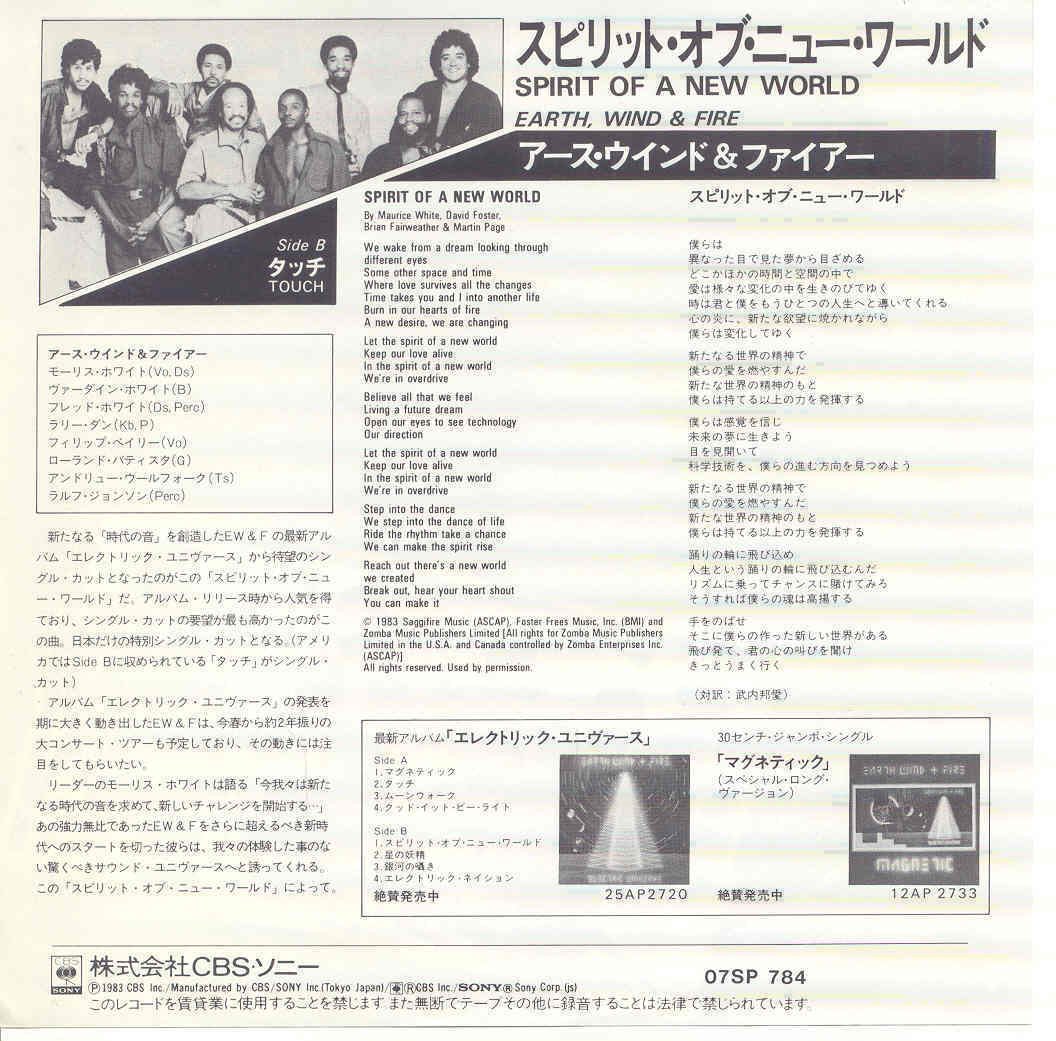 We wake from a dream looking through
different eyes
Some other space and time
Where love survives all the changes
Time takes you and I into another life
Burn in our hearts of fire
A new design, we are changing

Reach out there’s a new world we created
Break out, hear your heart shout
You can make it