from STAY THE NIGHT/ONLY YOU (single)

After a massive comeback with “Chicago 16” and “Hard To Say I’m Sorry,” supergroup Chicago walked back into the studio in 1983 to work on a new album, again with David Foster at the helm. The first fruit of those sessions saw the light of day in the spring of 1984 with the release of the debut single “Stay The Night”  from “Chicago 17.”This time around the band delivered a synth-driven rocker packed with energetic guitar playing and strong vocals by Peter Cetera. “Stay The Night” was another Cetera/Foster collaboration and was tailor-made for radio playing. This song also marked the first time that Chicago shot a video to promote the song on new TV music channels like MTV and VH1. The video shows Cetera chasing after a girl with all the other band members appearing in various cameos as the story develops.

“Stay The Night” was an out-of-the-box hit, reaching #16 on Billboard’s Hot 100. It opened the door to the amazing, seven times platinum success of “Chicago 17” that was eventually reinforced by other giant hits like “Hard Habit To Break” and “You’re The Inspiration.” “Stay The Night” is also the first song ever in the Chicago catalogue not to be played by Danny Seraphine on drums. Chicago’s legendary drummer wasn’t in a great moment, so Foster asked the late Jeff Porcaro of Toto to sit in and play on the track. The single’s b-side was another great song entitled “Only You.” Co-written by Foster with trombonist James Pankow, “Only You” is a total change of atmosphere compared to “Stay The Night.” It leans towards the R&B/Jazzy roots of the band thanks to the rich horns texture and the soulful vocals by Robert Lamm and Bill Champlin. Both songs are a joy to listen to and show how elegant and catchy Chicago’s pop music was around those days. 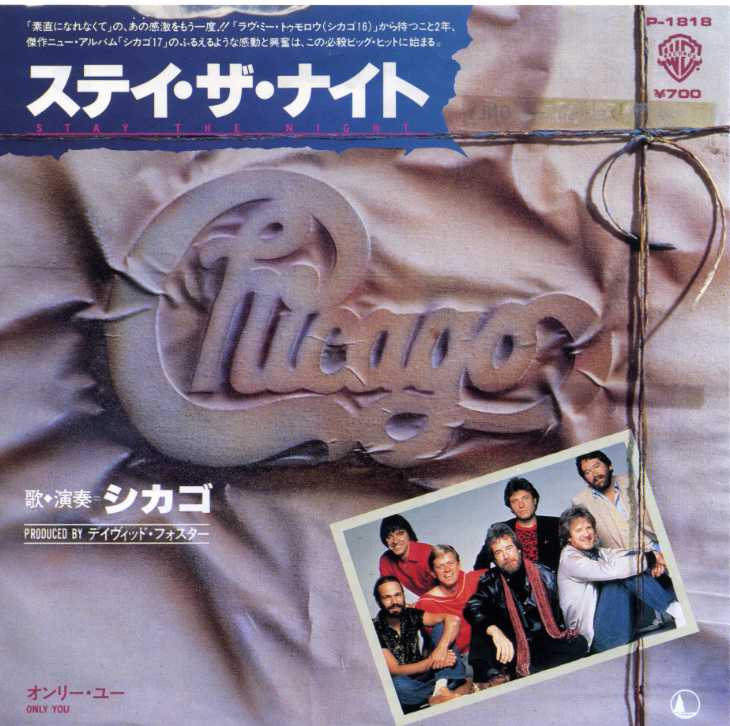 I don’t want you to misunderstand me
I just wanna say what’s on my mind
No need to hit me with an attitude
Because I haven’t got the time
I want you to know one thing’s for certain
I surely love your company
And I won’t take no if that’s your answer
At least that’s my philosophy
CHORUS:
Stay the night
There’s room enough here for two
Stay the night
I’d like to spend it with you
Stay the night
Why don’t we call it a day
No one can stop us, nothing is in the way
Have some friendly conversation
And if you still don’t have a clue
Unless there’s something else you’ve got in mind
We’ve got better things to do
CHORUS
Just to have you near me
Here by my side
Just to have you near
And when I get next to your body
Just to have you near me
I wanna tell you something, make it perfectly clear
We’re gonna have a very good time
CHORUS