SOMEWHERE OVER THE RAINBOW

from SOMEWHERE OVER THE RAINBOW/MY DESTINY (single)

Katharine McPhee is one of the best talents ever discovered on the TV show American Idol. McPhee was the runner up on the program’s 2006 fifth season and immediately caught the eye of American audiences as well as the attention of super-producer David Foster.

Foster took McPhee under his wing and brought her into the studio to record a version of “Somewhere Over The Rainbow,” an evergreen that she performed beautifully on American Idol’s finale. The single, backed up by “My Destiny,” was released on June 2006 by RCA Records. It skyrocketed to #12 on Billboard’s Hot 100 and eventually became the second best selling song of the year, staying on the charts for an amazing fifty-eight weeks. McPhee’s take on “Somewhere Over The Rainbow” was a total success due to her fantastic vocal performance plus the impeccable and lush David Foster/Humberto Gatica production. This successful collaboration brought her many others with Foster like a duet with Andrea Bocelli on “Can’t Help Falling In Love” for the CD/DVD “Live Under the Desert Sky.”  McPhee also had a high-profile appearance on the “Hitman: David Foster & Friends” concert where she performed one of Barbra Streisand’s signature songs, “Somewhere” from “West Side Story,” and again had a duet with Bocelli on the Foster mega hit “The Prayer.” In 2008, Foster asked McPhee to sing a new song entitled “I Will Be There With You” which was used for the promotion of Japan Airlines in the United States. 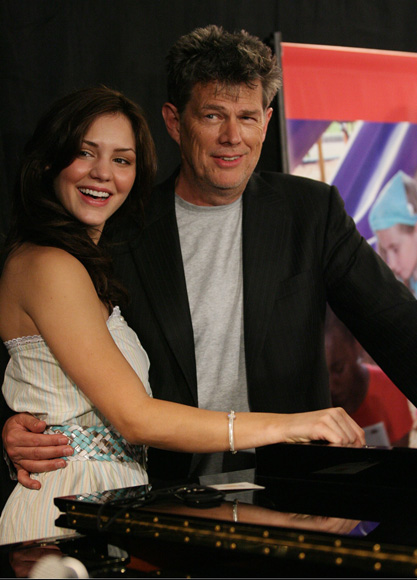 When all the clouds, darken up the skyway
There’s a rainbow highway to be found
Leading from your window pane
To place, behind the sun
Just a step beyond the rain?

Somewhere over the rainbow, way up high
There’s a place that I heard of once
In a lullaby
Someday I’ll wish upon a star
And wake up where the clouds are far
Behind me
Where troubles melt, like lemon drops
A way above the chimney tops
That’s where you’ll find me

If happy little blue birds fly
Beyond the rainbow
Why, oh, why can’t I?