“Crazy Love,” released in the fall of 2009, is Michael Bublè’s 4th studio album.
This new collection was an out of the box hit reaching the top spot of the charts in the US, the UK, Canada, Italy, Australia and several other countries and selling over six million copies worldwide to date.

Bublè presented his ever growing fan base the usual, perfectly dosed mix of old and most recent standards plus a couple of originals co-written with frequent collaborators Alan Chang and Amy Foster. One of those new songs, the catchy, up-tempo “Haven’t Met You Yet,” became a quick smash hit and also got nominated for a Grammy as Best Male Pop Vocal. For “Crazy Love” the singer teamed up again with his longtime collaborators David Foster, Humberto Gatica and Bob Rock. Foster’s stellar arrangement of “Cry Me A River” opens the album. It’s a wonderful rendition of the Ella Fitzgerald evergreen that would be perfect as a theme song for a James Bond movie. Foster also produced “Georgia On My Mind” beautifully sung by Bublè who sounds as smooth as silk on this number as he does on his take of Billy Vera’s “At This Moment.” The singer also shines on the Bob Rock produced duet with Sharon Jones & The Dap-Kings, “Baby (You’ve Got What It Takes)” and the Foster-directed, rocking rendition of The Eagles’ “Heartache Tonight.” The tracklist really doesn’t have weak points and makes for a delightful listen from start to finish with an absolute peak towards the end entitled “Whatever It Takes.” Again masterfully produced and arranged by Foster, this gem of a song was written by talented Canadian singer/songwriter, Ron Sexmith who duets with Bublè on this light bossa take of his composition.

Recently Warner Bros. has released a new version of “Crazy Love” entitled “Crazy Love (Hollywood Edition)” that includes all the songs of the original album plus the new single, “Hollywood,” produced by Rock, a few live tracks and a couple more Foster productions including a fantastic rendition of his classic tune,“The Best Of Me” beautifully sung by Bublè. 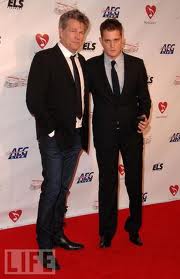 You make a wish, I’ll make one too
But close your eyes love when you do
Or it won’t be true