from THEATRE OF DEATH: LIVE AT HAMMERSMITH 2009

Recorded at the famous London venue, this new recording presents all the pivotal moments of Cooper’s career like “Only Women Bleed,” “Billion Dollar Babies,” “No More Mr. Nice Guy,” and his signature anthem, “School’s Out.” Cooper, well supported by his band, gives an energetic performance throughout the show with his still impressive vocals on the spotlight backed up by rousing instrumental performances.

“Nurse Rozetta” was co-written by Foster and Cooper with famous lyricist Bernie Taupin of Elton John fame and Toto axe-man Steve Lukather. It was originally included on Cooper’s 1979 album, “From The Inside.” Although recorded at the developing stage of Foster’s career, the album was produced by Foster who did a wonderful job finding a balance between his refined sounds and Cooper’s hard rock roots. The title track from that album is also performed on “Theatre Of Death: Live At Hammersmith 2009.” Both songs are presented in new, heavier versions that increase the powerful rock side and drastically change Foster’s inventive pop/rock arrangements of the originals. Give a listen to this example of versatility and superior talent proving once again that Foster isn’t just the King of Ballads. 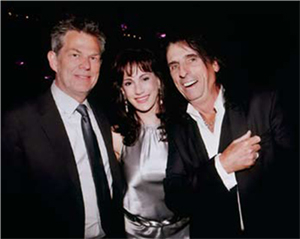